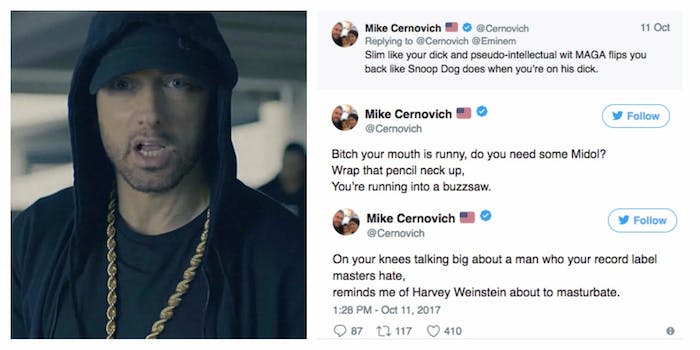 The conservative responses to Eminem were terrible

Let’s just say yesterday wasn’t a great day for #MAGA Twitter, when the majority of them woke up to find out that their first or second favorite rapper (the other choice is obviously Macklemore), Eminem, decided to take on their leader, Donald Trump, at the BET Hip-Hop Awards. It’s unclear whether or not Eminem completely Papa Doc’d 45, but it was certainly close.

In fact, the similarities are striking: 1) Trump did not respond and, 2) He went to private school.

Mike Cernovich had what can only be described as a moment:

Cernovich is a right-wing social media personality/newfound journalist, which means he’s basically a troll that bothers people. In response to Eminem, it appears that he went ahead and concocted some of the worst raps that we’ve seen in eons. Rhyming “Midol” with “buzzsaw” definitely made someone in the Merriam-Webster offices compulsively pull the fire alarm. It’s now officially official: the alt-right does not have bars.

But he wasn’t the only one.

Here we have the classic, “I used to like when Eminem offended literally every person on the planet, but seeing him go after Donald Trump was the LAST straw” Not too often do you see a cacophony of contradiction quite like a “Deplorables” Twitter name plus a phrase from a popular black comedy combined with a black person meme. Newsflash: you can’t simultaneously support a man that denounces the social progress of a culture you’re constantly stealing from. Appropriation 101.

Thank goodness the man with the @AthleticOpinion handle has range outside of sports because that’s what we all needed here—cold hard data. If you’re in a room with five Eminem fans, a shocking FOUR are Trump supporters. For a group so committed to the “facts” and “fake news,” this stat seems a little bit misleading without relevant sources.

Eminem vs Kid Rock, political battle rap. Eminem would pull a Hillary and only insult. Kid Rock would pull a Trump and tell the truth. #MAGA

To this tweet’s credit, “Bawitdaba” was one of the more factual songs of this generation: “My name is Kiiiiiiiiiiiiiiiiiiiid… Kid Rock.” No quibbles there. That is his literally his stage name. Who would have thought? But two white guys battling in fake hypotheticals for political office in Detroit. Now that’s 2017!

“We” = The American people.

Ah yes. @Eminem a moral compass who's been arrested, rapped about assaulting his wife, sued by his mother & anti-LGBT. Real people's champ.

Ah yes, CVS Brand Tomi Lahren with the most vanilla take in the game. Being a bubbly right-wing blonde talking head is quite literally the easiest job in America right now and Britt is treating it like a Rubik’s Cube.

And then there’s this.

A 280-character tweet advising people to burn a CD in the year 2017 is the biggest indictment on the Twitter platform yet.