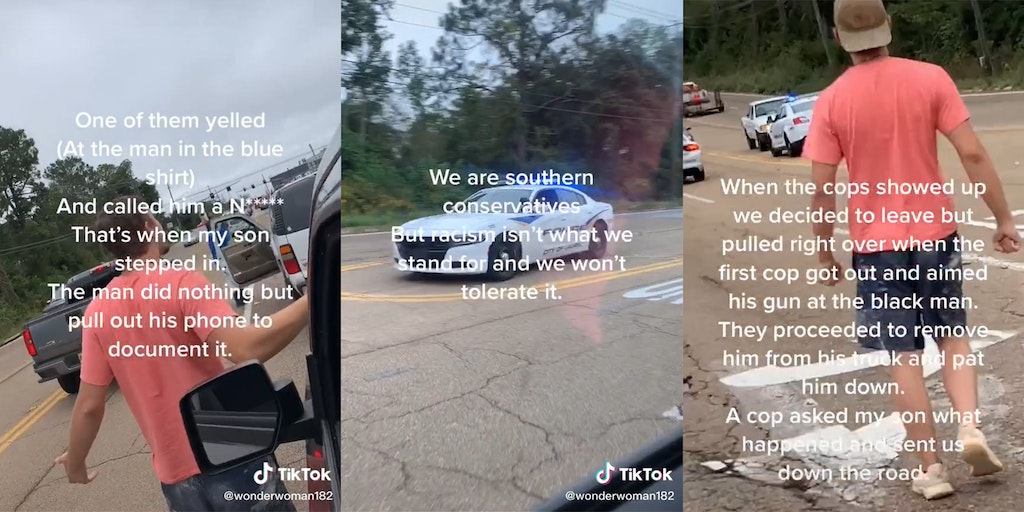 The video is captioned, 'Both sides: This has GOT TO STOP!'

People have mixed feelings about a viral video showing a white conservative defending a Black man against racist Trump supporters and police.

The video starts with a young man getting out of the car and saying his piece after he sees Trump supporters call the Black man a racist slur.

“You’re being a bitch,” the man says. “I support a flag too, but keep that shit to yourself.”

The man’s mother, who uploaded the video on TikTok as @WonderWomanRayne182, gave some context in a caption: “I was with my son, his fiance, and my grandbaby, heading through town when we came up on a redneck flag parade that blocked and stopped an entire lane of traffic. It wasn’t a big deal until One of them yelled (At the man in the blue shirt) And called him a N*****. That’s when my son stepped in. The man did nothing but pull out his phone to document it.”

@WonderWomanRayne182’s son continues yelling at the members of the parade.

“That’s the reason why everybody’s motherfuckin’ fighting, because of this shit right here, dude,” he says. “You grow the fuck up and have your own fucking opinion and keep that shit to your motherfucking self.”

Another caption on the video reads, “We are southern conservatives. But racism isn’t what we stand for and we won’t tolerate it.”

The next two captions, explaining what happened next, are curious: “When the cops showed up we decided to leave but pulled right over when the first cop got out and aimed his gun at the Black man. They proceeded to remove him from his truck and pat him down. A cop asked my son what happened and sent us down the road.”

At this point, the young man storms out of the truck and toward the police, yelling, “What the fuck! Ain’t nobody gonna say shit!”

@WonderWomanRayne182 ends her video with the caption, “Both sides: This has GOT TO STOP!”

In a follow-up video, the man’s mom and fiancé ask him to get back into the truck. He tells them that what the cops are doing is “fucked up.”

His fiancé yells at the Black man, “That’s OK! I got you, brother!”

It does not appear the man who exited the car ever made contact with the police, though he could have once the video ended.

@WonderWomanRayne182 replied to a comment and said she would not argue politics in what was an inherently political ordeal. She even captioned her post with heavyweight hashtags, including #RaceWars, #Trump, #Biden, #conservative, #democrat, and #racism.

TikToker @Jordans_World2020 took the OP to task for not doing more: “[Your son] had the right energy; y’all did not.”

On a Twitter post that fused the videos together, people’s opinions ran the gamut. The family’s identification as conservatives, and possibly as Trump supporters, left a bitter taste for many. The meaning of “conservative” was also up for debate.

“Being a conservative doesn’t always mean voting for Trump,” @trlady replied. “Many of us vote for good over evil even if we disagree with some policies. Trump is NOT a conservative!”

Other people thought the original poster’s exhortation to “both sides” was ridiculous.

@MendoCa82 tweeted: “Trump supporters yelling racist statements at someone then the victim of that has cops pointing guns at him. So, by the ‘both sides’ statement, is that referring to conservatives and cops?”