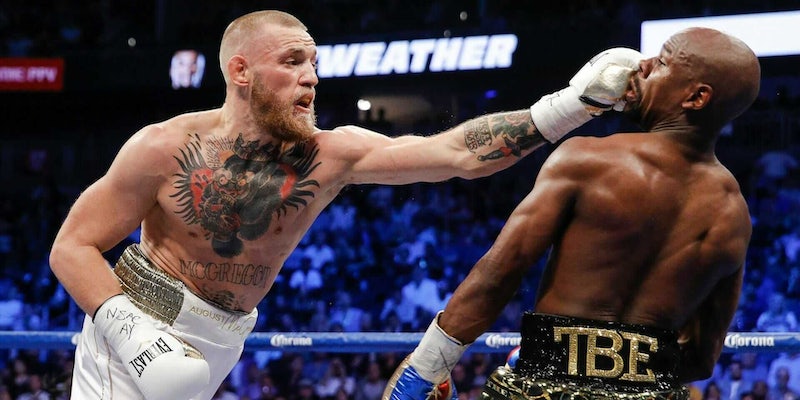 UFC star Conor McGregor is apparently so fed up with mocking memes of him created by 50 Cent that McGregor is willing to step into the ring with the rapper.

According to the Sun this week, McGregor was asked which celebrity he most wanted to fight. It didn’t take long before McGregor mentioned 50 Cent’s name.

The feud stems back to when McGregor took on legendary boxer Floyd Mayweather in 2017. In the buildup to that mega-event, 50 Cent—who has longtime ties to Mayweather—and McGregor verbally feuded. McGregor said he was thankful for 50 Cent, whose real name is Curtis Jackson, because McGregor could use him as a promotional tool to make that huge event even more gargantuan.

Even though that fight is 26 months in the past—Mayweather knocked out McGregor in the 10th round—50 Cent has kept up the online mockery, mostly through the use of memes.

“Then after that he began a little tirade against me on social media, particularly Instagram where he’d make these memes about me constantly,” McGregor said, via the Sun. “Every time I’d go onto the internet, I’d see 50 Cent had posted up some new stupid meme and I wrote one of the memes—‘old man on the internet making memes’ and then he blocked me. So he’s had to block me, and I still see sometimes, I still get tagged in—other people saying he’s saying this and he’s saying that.”

Here’s a sampling. This was when, after McGregor charged at a bus filled with UFC fighters in 2018 and threw a dolly at the vehicle (which led to his arrest), 50 Cent depicted McGregor as Britney Spears going after paparazzi with an umbrella. “Is that you, Britney?” 50 Cent asked in the photoshopped Instagram post.

‘Is that you, Britney?’ 50 Cent mocks Conor McGregor with Instagram post about his bus rampage US News https://t.co/jyJjh86INR pic.twitter.com/2wMDpfh3TO

Then, after UFC star Khabib Nurmagomedov choked out McGregor a year ago, 50 Cent went back to work.

This is when you regret throwing a chair in Brooklyn. LOL pic.twitter.com/GJFCVUyJmP

McGregor—who apparently will return to the Octagon in January against an actual professional mixed martial artist—made more than $100 million to fight Mayweather and several million more vs. Nurmagomedov. But apparently there might be an even bigger price to pay if you won’t stop mocking him on the internet.