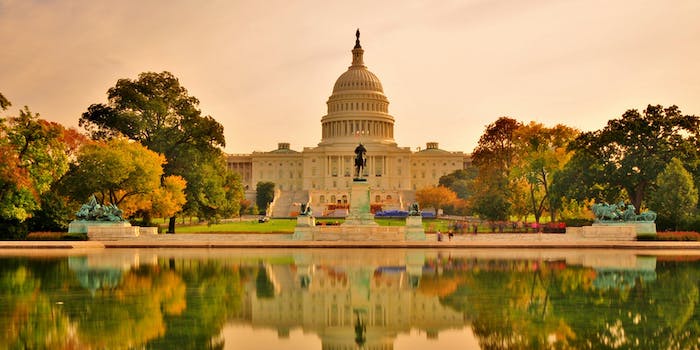 Dispensing with this bill is long overdue.

It’s doubtful that the PATRIOT Act will be repealed in this legislative session, but make no mistake about it: Dispensing with this bill, one of the more pernicious legacies of the post-9/11 erosion of American civil liberties, is long overdue.

First, here’s an introduction to the measure that could theoretically pull this off: the Surveillance State Repeal Act, which was sponsored by Reps. Mark Pocan (D-WI) and Thomas Massie (R-KY). If implemented, it would do more than simply repeal the PATRIOT Act; after all, getting rid of that one bill won’t eliminate National Security Agency spying and other surveillance state activities anyway (especially since the PATRIOT Act is already set to expire in June).

As such, the SSRA would also revoke the 2008 FISA (Foreign Intelligence Surveillance Act) Amendments Act, a spying law used by the NSA to justify collecting millions upon millions of private online communications. It would also reform the secret court that oversees our spying apparatus, add further protections for whistleblowers, and prohibit the government from requiring technology companies to include “backdoors” in their products.

Naturally, this last detail has won some powerful Silicon Valley firms to the anti-NSA agenda. Companies like Google, Microsoft, Apple, Wikimedia, and Mozilla joined civil libertarian advocacy groups in issuing a letter to the White House urging “a clear, strong, and effective end to bulk collection practices under the USA PATRIOT Act,” “appropriate safeguards in place to protect privacy and users’ rights,” and “transparency and accountability mechanisms for both government and company reporting, as well as an appropriate declassification regime for Foreign Intelligence Surveillance Court decisions.”

Although these businesses recognize the importance of protecting America from domestic and foreign terrorist threats, they object to “the scope of the United States’ surveillance and bulk collection activities,” particularly that which has come to the public’s attention since the Edward Snowden leaks.

Indeed, revelations about the scope of American online surveillance have actually undermined faith in the digital revolution. “The Internet is global, and as a global leader, the U.S. helps set the standards for acceptable behavior,” writes Sascha Meinrath in the Christian Science Monitor. “Mass domestic and foreign spying legitimates the same behavior by other regimes while simultaneously creating a perverse incentive to create a more fractured global communications system.”

Elaborating on this last point, Meinrath wrote a piece in the New America Foundation’s Weekly Wonk which explained that the ongoing international movement to disconnect from American internet hegemony can be linked to a post-Snowden backlash that “is being fueled not by democracies that oppose American ideals, but rather by allies that resent Washington’s betrayal of its own overarchingly positive vision.”

Unfortunately, the political smart money still says that the SSRA will probably fail, if for no other reason than Washington is notoriously reluctant to risk being viewed as soft on terrorism. Although President Obama could set things off on the right foot by revoking Executive Order 12333—a relic from the Reagan years that would be the last foothold used by the surveillance state to continue its current scope of spying if the SSRA was actually passed—the reality is that the unprecedented Republican obstructionism toward Obama’s agenda could guarantee a right-wing backlash against the measure by simple virtue of him taking a step to push it forward.

The fact that the SSRA isn’t likely to pass, however, doesn’t mean we shouldn’t celebrate it. Understanding the political dynamics and policy implications of the SSRA can help guide us toward a future in which the civil liberties infringements of yesteryear remain a thing of the past.

Unfortunately for supporters of the PATRIOT Act and NSA surveillance programs, there is little evidence that either of those programs have actually made us safer. “Almost every major terrorist attack on Western soil in the past fifteen years has been committed by people who were already known to law enforcement,” writes Mattathias Schwartz of The New Yorker, later adding: “In each of these cases, the authorities were not wanting for data. What they failed to do was appreciate the significance of the data they already had.”

What’s more, the oft-repeated line about the NSA having thwarted 54 terrorist attacks with its spying program has been decisively debunked, leaving supporters of domestic surveillance without the sweeping and concrete pattern of accomplishment necessary to justify continuing their program.

Without a clear-cut case for their necessity, the only notable legacy left by these measures is their unconstitutionality. As the ACLU explained in a 2010 article about the PATRIOT Act (one that, notably, was written before Edward Snowden’s leaks made its points even more relevant), the measure violates the First Amendment by “by prohibiting the recipients of search orders from telling others about those orders, even where there is no real need for secrecy” and “effectively authorizing the FBI to launch investigations of American citizens in part for exercising their freedom of speech.”

Similarly, it violates the Fourth Amendment by allowing federal authorities to “conduct a search without obtaining a warrant and showing probable cause…that the person has committed or will commit a crime” and by “failing to provide notice—even after the fact—to persons whose privacy has been compromised.”

This brings us to the other, and by far most important, reason why the SSRA should be celebrated: By simple virtue of being brought to the House floor, it demonstrates a long-awaited effort by our legislators to reconcile the security needs faced by 21st century Americans with the ideals of our founding fathers. Even though this effort is almost bound to fail, it represents a coming sea change; it might seem like too little, but it’s never too late to get it right.