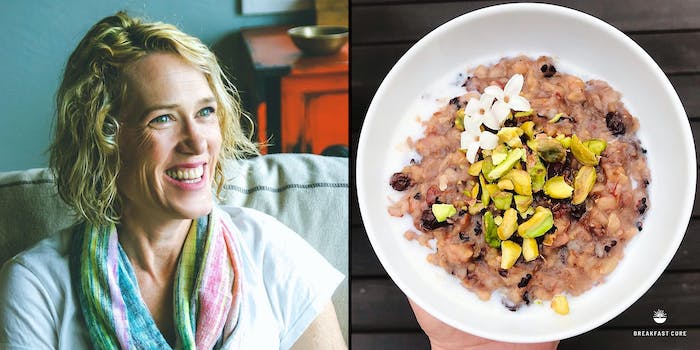 She claimed she modernized the porridge dish for the western palate.

A U.S.-based company that sold an “improved” version of congee—a rice porridge that’s a staple in many Asian countries—is now addressing claims that its product appropriates Asian culture.

Breakfast Cure, which is based out of Portland, Oregon, and was founded in 2017 by Karen Taylor, sells a variety of congee packets that are gluten-free so people can make their own congee. On its website, the mission statement reads, “By design, our simple congee method is spreading the wisdom that warm cooked foods heal, soothe, and energize.”

In a blog post titled “How I discovered the miracle of congee and improved it” that has since been heavily edited, Taylor relayed how she first discovered congee 20 years ago while attending what she calls “Chinese medical school” in Santa Fe, New Mexico.

“Congee is a traditional Asian rice porridge, that’s been eaten all over Asia for hundreds, if not thousands of years,” Taylor wrote in an archived version of the blog post. “The Breakfast Cure is a modern adaptation of that. I’ve spent a lot of time modernizing it for the Western pallet-making a congee that you can eat and find delicious and that doesn’t seem foreign, but delivers all of the medicinal healing properties of this ancient recipe.”

Last week, screenshots from Breakfast Cure’s Instagram account, which included a post calling Taylor “Our Founder and Queen of Congee,” went viral. It also didn’t take long for people to discover Taylor’s blog post claiming that she “improved” congee and made it palatable for white consumers.

Several people compared Breakfast Cure to Mahjong Line, a company that came under fire earlier this year for offering an expensive, “modern makeover” to the popular Chinese game.

While Taylor’s post is still up, several edits have been made to it with no acknowledgment of those changes. The post has a different URL and is now titled “How I discovered the miracle of congee” and any mention of attempting to modernize congee for a western palate has been removed.

“I’ve spent years creating flavors based on porridge from around the world,” Taylor’s post now reads. “My interest has always been in the medicinal healing properties of this ancient recipe.”

Several days after being called out for cultural appropriation, Breakfast Cure released a statement acknowledging it hadn’t done enough to support the AAPI community.

“Recently, we fell short of supporting and honoring the Asian American community and for that, we are deeply sorry,” the company said on Instagram. “We take full responsibility for any language on our website or in our marketing and have taken immediate steps to remedy that and educate ourselves, revising our mission to not just creating delicious breakfast meals, but becoming a better ally for the AAPI community.”

The Breakfast Cure website now states that it will donate “1% of all sales or 10% of profit, whichever is larger, to Asian Americans Advancing Justice.

Speaking to TODAY Food, Taylor offered a non-apology apology. She noted that the backlash surprised her because she had already been “embraced by the Chinese medicine community” and that she’s open to dialogue from people who approach it in good faith (versus the “offensive” responses she’s gotten). She also noted that while racism is a big problem—in response to complaints that she never featured any information on fighting racism against the AAPI community, obesity is a big problem as well.

“I am really sorry for anything insensitive that I’ve said or that has caused any pain or suffering to anyone; that is so far from my intention,” Taylor said. “It’s been a very humbling few days and I’ve hoped some kind of productive dialogue could come out of it, because I love to have authentic conversations and explore how I could do better, because I am trying, and obviously I’ve missed some really important things.”