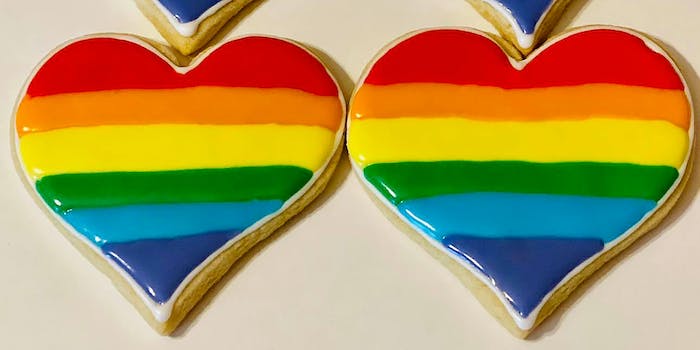 One client canceled a large order after the Bakery's Pride post.

After Confections bakery in Texas posted a picture to Facebook of its heart-shaped rainbow iced cookies with the caption “Happy Pride to all our LGBTQ friends! All lovers of cookies and happiness are welcome here,” the backlash was instant and predictable. One client immediately canceled a large order of cookies, apparently leaving a very hateful message in the process, and a significant number of their online followers unsubscribed as well.

Because the canceled order was already finished, Confections decided to make another Facebook post letting people know what had happened in response to their pride post and that, as a result, the shop had an excess of summer-themed cookies available that day.

The response was overwhelming. In addition to the flood of supportive comments online, there were so many customers the next day that the line for the bakery stretched around the block.

The internet’s outrage over the homophobic way they’d been treated had sent them so many customers they ended up having to close up an hour early, as people had bought out every single baked good in the store. The same thing happened the next day as well, with customers arriving too late to snap up some sweets even trying to donate directly to the store. Dawn and Miranda, the sisters who own the bakery, instead encouraged their supportive customers to donate the money to local animal shelters instead. “In the 11 years we’ve been open we’ve never seen anything quite like this,” Dawn wrote in a Facebook post.

It wasn’t just people in driving distance who wanted to buy their cookies either—people all across the U.S. flooded the sisters with requests for mail-order delivery. Unfortunately for them, the sisters had already tried mail-order and discovered that their cookies didn’t stand up to the bumpy ride, but it did give them another charitable idea. Though they don’t plan on offering cross-country delivery, they are planning on setting up a system that lets people pay for a cookie donation to local nursing homes and charities, with tentative plans for it to go live after Father’s Day.

The bakery did receive some pushback from the LGTBQ+ community, however, over their choice to give the donations to animal charities rather than organizations that help the LGTBQ+ communities. Given the discrimination faced by LGTBQ+ Texans, it felt wrong to some people that money raised in response to a homophobic incident, during Pride month no less, should be used to benefit other groups.

Co-owner Miranda has a response to that, however, commenting on one of their original posts that “LGBTQ folks love animals too. We DID NOT MAKE ANYONE donate to animal rescues, the people chose to do so. Love all y’all! Amazingness.”

We have reached out to Confections and will update this article if they respond.