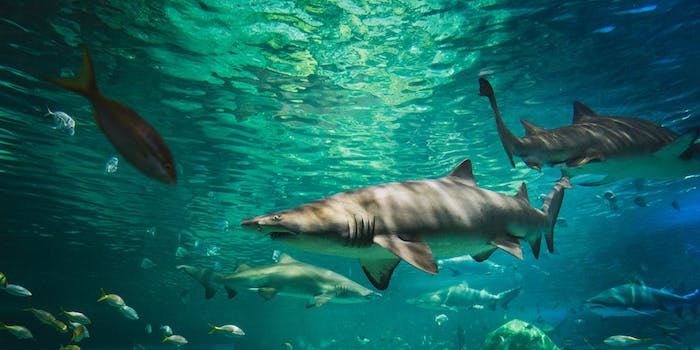 What made the Discovery Channel grab ahold of sharks, and what keeps people coming back to watch them every year?

Shark Week is back, and it’s bigger than ever.

When the longstanding Discovery Channel tradition returned Sunday night, ratings were huge, giving the network its 13th highest-rated primetime evening in their history. The rise of Internet–TV interaction has helped Discovery achieve this feat, and according to Variety, “the social media-friendly lineup…racked up over 4 million interactions on Facebook through three million unique users on Sunday, and 11 primetime Twitter trending topics were Shark Week related.”

That said, if you’re unfamiliar with Shark Week, social media probably had you very confused on Sunday night. The Huffington Post explained what Shark Week was to these poor souls last year, who checked their Twitter accounts, unaware of the barrage of shark-related hashtags they were about to witness.

But while not everyone knows what Shark Week is, most do. Tempting as it might be to say that this time every year, the Discovery Channel “takes a bite out of the competition,” the significance of Shark Week really can’t be overrated. This is a legitimate cultural phenomenon, that goes way beyond quizzes and drinking games.

The fact is, Americans have always been slightly obsessed with sharks. The Internet’s love of niche subject matter enhances this, but shark-centric fandom began way before that. Even prior to Spielberg’s Jaws, they were never far away from our brains. In examining the history of shark fascination leading up to Discovery’s own Shark Week, ABC News’ Colleen Curry lists a real series of shark attacks that left four people dead over two weeks and prompted many shark hunts across the country. She also brings up Peter Benchley’s original Jaws novel, which was loosely based on these events and became a sensation upon its release in and of itself.

The film adaptation of Jaws changed everything though. It’s still regarded as the greatest summer blockbuster of all time, and it shaped the landscape of Hollywood in an indelible way, while also cementing the power of sharks into the American consciousness. One of the taglines for the movie read, “You’ll never go in the water again,” and after seeing it, many didn’t.

The ferocity of these animals has more recently manifested itself in oddities like Street Sharks and the Sharknado cult franchise. Relating this back to Shark Week, John Doyle of Canada’s The Globe and Mail breaks down America’s feelings on sharks. “The longevity of Shark Week lends itself to some analysis, but that hard thinking about it is probably not worth any time and effort,” Doyle writes. “It’s not new; it’s old-fashioned anthropomorphism: Sharks are the ultimate antiheroes—warriors, loners and complex creatures—not just eating machines.”

But what made the Discovery Channel grab ahold of sharks, and what keeps people coming back to watch them every year?

Seeking the answer to this question, former Atlantic editor Ashley Fetters looked at the history of Shark Week in 2012. What she found was that Discovery’s success was due, in a way, to a lucky guess. “It had been a decade since Steven Spielberg‘s Jaws gave moviegoers the collective creeps about open-water swimming, and the fledgling network had noticed a spike in ratings whenever shark-related programming was aired on Discovery. So…in the late summer of 1988, Shark Week hit the airwaves… Its success spawned a sequel in 1989, and its ascent from there, remarkably, never faltered.”

Former Shark Week executive producer Brooke Runnette remembered Discovery’s own sense of unexpected delight at Shark Week’s achievements in The Atlantic. “Everybody was always fairly surprised that it kept working,” Bunnette quipped. “It kind of taught us what it wanted to be, in a way.”

And what Shark Week wanted to be evolved from there. Chronicling its triumph from 1988 into the 2000s, TIME’s Megan Gibson analyzed Discovery’s stylistic variations on Shark Week throughout the years.

Mixing docudrama-style narration, heart-stopping footage, and educational content, the series has since become a summer-television staple with a cultish following… and the ratings confirm its popularity. Every year since 1995, the series has pulled in an audience of more than 20 million… Though sharks have always been the main attraction, the channel delved into celebrity appearances in 1994, when Peter Benchley, author of Jaws, served as host. Since then, many well-known faces have lent their fame to Shark Week’s various shows. From supermodel Heidi Klum in 2003 to Dirty Jobs‘ Mike Rowe in 2006 to talk-show host Craig Ferguson this year, many have been eager to associate themselves with the event.

But with all the celebrity baiting and other excitement, many have begun to suggest that Shark Week has lost its soul. A lot of this criticism is of the same variety that gets directed at the History Channel, when they toss careless claims around and try to back them up with “professionals,” there to provide a false authenticity (Ancient Aliens is the show that most often comes up when talking about this practice.)

Some of the problem here goes all the way back to Jaws. The film crystallized Americans’ curiosity on the subject of sharks, but it did so in a way that made them look like monsters of the deep, always hiding out in the water, just below the surface. But those who study sharks will tell you that, as is the case with most animals, we’re a lot more dangerous for them than they are for us.

George Burgess, director of the Florida Program for Shark Research in Gainesville, echoed these sentiments, telling USA Today that Shark Week is a “double-edged sword.” He continues, “I’m kind of disappointed, and I think most researchers are, too. It obviously is a big draw, but I’m afraid that the programs have gone more to entertainment and less to documentary over the years. It’s kind of a shame, because they have the opportunity to teach good stuff in what’s going on with science.”

According to some, “more to entertainment” is an understatement. Brad Plummer wrote about a series of programs that Shark Week has aired which are essentially just mockumentaries for Vox’s Brad Plumer.

On Sunday, the Discovery Channel aired a two-hour segment called Shark of Darkness: Wrath of Submarine about a 35-foot-long great white shark the size of a sub that supposedly attacked people off the coast of South Africa… None of this is real. As zoologist Michelle Wciesel points out at Southern Fried Science, the ‘submarine shark’ in South Africa was an urban legend started by journalists in the 1970s who were trying to fool a gullible public… This is hardly the first time the Discovery Channel has conjured pseudo-facts about sharks out of thin air… last year’s Shark Week featured a documentary called Megalodon: The Monster Shark Lives, which claimed that a giant shark that’s been extinct for millions of years is suddenly lurking in the oceans once again, ready to attack. This, too, is completely bogus.

Then there’s the consumer element in this. Ad Age catalogued all the companies participating in 2014’s Shark Week with viral tie-ins, which include Hot Pockets, Southern Comfort, Priceline, Gillette, Dunkin’ Donuts, Lush Cosmetics, Cap’N Crunch, Nissan, and Volkswagen. Unsurprisingly, not all scientific minds are crazy about the idea of these enterprises capitalizing on sharks for their own benefit, when they could easily be donating profits to help ensure the survival of the world’s sharks (for the record, Lush has partnered with a non-profit called United Conservationists to raise awareness in this regard).

TIME‘s Brad Tuttle further pointed out the barrage of Shark Week merchandise Discovery has on their own site, but Tuttle does find some positivity around the massive Shark Week industry. Certain towns, for instance, benefit from the tourism the show encourages. Tuttle reports, “It might seem odd that any beach community would actively want to associate itself with sharks. Yet the effort to brand Chatham, Mass., the town on the elbow of Cape Cod—near plenty of seals and therefore sharks, too—as something along the lines of the Shark Capital of America has been several years in the making.”

For Shark Week to survive, it needs to maintain a balance between its benefits and harmful externalities. Predictably, Discovery Channel President Mark Bunting believes the wonder of the animals ultimately comes through in Shark Week. As he told Gibson, “The mystery and power behind these creatures is unmatched.” Canada’s John Doyle isn’t so sure though. “In a summer of real strangeness in the world and much brutality, there’s nothing wrong with indulging in Shark Week,” Doyle remarks. “Just don’t mistake any of it for science.”

But perhaps the real victory of Shark Week will be if it can get just a few people legitimately interested in marine biology and the larger majesty of the animal kingdom. If even a couple of kids walk away with added respect and desire to learn more about the star animal, then in some way, all the sensationalism and consumerism is worth it. And we can go on living every week like it’s Shark Week.