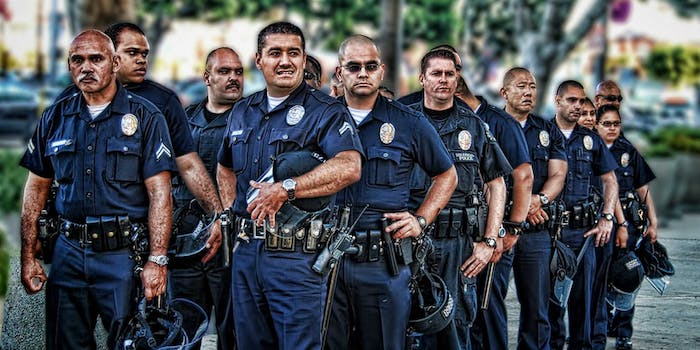 If the cries of #BlackLivesMatter protestors weren’t enough, research just confirmed widespread fears about the state of policing in America.

Not one, but two recent reports analyzed fatal police shootings in the United States, with alarming results. Both the Washington Post and the Guardian found that in the first six months of 2015, police had already killed more than 461 people. According to the Post, it’s a threshold the Federal Bureau of Investigation’s official count hadn’t surpassed since the 1970s. At the current pace, 2015 could be the worst year for police-involved deaths yet.

After culling data from news reports, public records, open Internet sources and even crowdsourced data, both papers released separate counts for people killed by police officers. The Post counted 466 people shot and killed by police officers, whereas the Guardian has counted 495. The Guardian also records deaths caused by taser, by vehicle strike, and those that occur while in custody, which brings their total to a staggering 568.

Over at KilledByPolice.net, an Internet database started in 2013, the total is even more jarring: 574 dead.

If the data serves as any indication, the current model of policing is broken. Indeed, as the Guardian reported, police officers in the United States kill more people days than many other countries do in years. It will take much more than body cameras and increased monitoring to deescalate violent situations between the police and the communities they serve. The current “tough on crime” model fosters an “us vs. them” atmosphere between officers and civilians.

It’s about time Americans embrace one of the most promising ways of reforming the problem: community policing.

American law enforcement is killing people at "a rate of about 1 every 9 hours, or 2.5 shootings per day." http://t.co/dJNJPT6G3W

The current system does little to hold law enforcement agencies accountable for their actions, and data collection practices make it even harder. Although the FBI keeps a cursory tally of fatal police shootings, only a small fraction of departments nationwide—six percent, to be precise—bother to report incidents.

In fact, the St. Louis Post-Dispatch found that, of over 18,000 police agencies in the U.S., only 1,100 departments shared that information with the FBI. Databases like the Post and Guardian’s, perhaps imperfect in their methodologies, are still two of the most comprehensive resources available to monitor fatalities caused by police.

These reports come eleven months after former Officer Darren Wilson shot and killed Michael Brown, an unarmed black teen in Ferguson, Missouri; since then, police violence has become the topic of debate in America, with activists demanding reform and much needed oversight as black and brown bodies keep falling to the ground.

Of course, police violence doesn’t exclusively fall along racial lines. The Post’s report also found that of the 462 fatal police shootings, 124 had been people with varying degrees of mental illness. Police don’t receive much education on issues of mental health, often responding to situations based their own subjective understanding rather than approaches guided by best practices.

Instead, logging hours of firearm training gets prioritized ahead of lessons about crisis intervention. Issues of both race and mental illness in policing tragically intersected, for example, when Tanesha Anderson, an unarmed black woman with schizophrenia, was fatally slammed to the ground by police officers in Cleveland, Ohio.

Many police officers enter situations armed and braced for an adverse interaction, often without the education or restraint necessary to deescalate violent conflict. And when an officer’s judgment is clouded by unconscious bias about race and gender, or a lack of awareness about mental illness, the results can be fatal.

In December, President Obama signed an executive order creating the “21st Century Policing Task Force” in response to the events in Ferguson, Staten Island, and Cleveland, according to the White House blog. The task force, which released its final report in May, aims to “strengthen the relationships between police and the communities they are supposed to protect and serve,” the very basis of community policing. Ten cities had already adopted the recommendations of the task force by the time the task force published its report.

One such city, Camden, New Jersey, has been lauded by Obama and others for improvements made since implementing community policing strategies. According to NPR, the city opted to dissolve its police force in 2012, allowing county officers to take over, with an emphasis on foot patrols. In just two years, the murder rate dropped more than half.

However, that doesn’t mean Camden’s transition has been seamless. The New Jersey wing of the American Civil Liberties Union notes the rise in “low-level arrests and summonses,” as well as excessive-force complaints. Although Camden isn’t a perfect example, other cities with a longer track record of community policing have shown significantly better outcomes.

Last September, amid the protests in Ferguson, the Contra Costa Times profiled the progress made by the police department in Richmond, California, detailing more than six years of efforts to decrease officer-involved shootings. Once the most violent city in the Bay Area, according to the report, “[t]he Police Department has averaged fewer than one officer-involved shooting per year since 2008, and no one has been killed by a cop since 2007.”

Unfortunately, one week after the story was published, a Richmond police officer shot and killed a 24-year-old man in a confrontation. But when compared with the national average of three per day, Richmond’s one officer-involved death in six years serves as a testament to the life-saving potential of community policing.

Under the direction of police chief Chris Magnus, the Richmond Police Department made clear that officers would be held accountable for every bullet fired. “In training, we stress accuracy and accountability,” Richmond’s firearms instructor Lt. Louie Tirona told Contra Costa. “We tell our cops from the get go, ‘Every bullet has your name on it.”

But more than bullets and accountability, community policing emphasizes making police officers known and trusted public servants, often requiring them to walk their beats rather than drive, as many officers do.

Six days into July, here is the tally for the month. Learn more: https://t.co/zArPy0UdKm pic.twitter.com/elF94tN3ZZ

If interactions between officers and community members were stabilized before conflicts arise, a certain amount of trust can be built during periods of relative peace. As NPR reported in April, Racine, Wisconsin, once known as the “murder capital of Wisconsin,” was one of the first cities to adopt community policing during in 1990s. Crime in Racine has since dropped to a 50-year low, according to the report, and it’s not because officers indiscriminately draw their guns.

It will take much more than body cameras and increased monitoring to deescalate violent situations between the police and the communities they serve.

With a number of American cities already leading the way, it’s empirically proven that community policing helps keep the peace while saving lives. Now is the time to toss out conventional methods and move towards a national realization of changing the way police departments operate. The recommendations of the 21st Century Policing Task Force are certainly a fine place to start, as they provide a substantial blueprint for transitioning police departments to a community-oriented approach.

Even technological gains can be leveraged in innovative ways, as the task force calls for organizations like Code for America to assist law enforcement agencies with open data collection and sharing, according to The Marshall Project. Along with legislative bills like Senators Barbara Boxer (D-Calif.) and Cory Booker’s (D-N.J.) Police Reporting of Information, Data, and Evidence Act (PRIDE Act), data collection technologies put the onus on police departments to build trust with their communities by being transparent.

If police are held accountable for their actions, law enforcement could possibly result in fewer deaths.

Short of completely disarming law enforcement, community policing seems to have the most potential to dramatically reduce fatal violence. With that comes education in crisis intervention, understanding the needs of people in marginalized communities, and responding in a culturally competent manner. Perhaps then will officers be more likely to respond with logic and compassion—rather than their bullets.

Feliks Garcia is a writer, powerlifter, and foster of homeless cats. He holds an MA in Media Studies from the University of Texas at Austin, is the Offsite Editor for the Offing, and previously edited CAP Magazine.