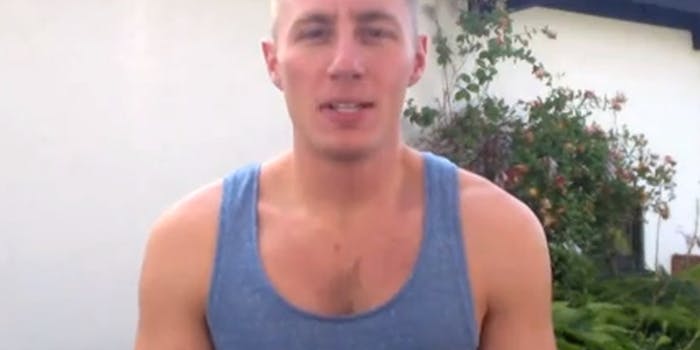 How the Internet helps young gay teens come out

It's not possible to create a utopian, 100 percent safe environment for young gay teens on the Internet. But safe spaces like Tumblr's Everyone Is Gay can cut down the suicide rate. Here's how.

Randy Phillips didn’t know what he was getting into.

Before revealing his identity, the military airman discreetly uploaded videos shot from the neck down detailing what it’s like to lead a closeted lifestyle in the United States Air Force. The short snippets garnered him a mix of praise and condemnation.

Regardless, Phillips, then 21, knew he had to come all the way out. Not just revealing his name, age, and face—but sexually. So, inspired by the repeal of Don’t Ask, Don’t Tell, he came out to the Internet. “There would be no turning back,” he explained.

The Alabama native’s candid video garnered lots of attention very quickly. Phillips’s inbox filled up with thousands of hate messages. But he still saw it as a positive moment in his life.

Amid all the insults and bigotry was a vocal group of fans supporting Phillips’s momentous step. His stock quickly rose with the gay community; fervent fans tracked his every move on YouTube and Twitter. His online presence now is nothing short of a minor social media empire.

It was a different story for Jardin Bell, a gay 15-year-old in Oregon. Bell hanged himself at his school’s playground because he couldn’t handle the bullying he encountered at school and online. He was rushed to the hospital, but shortly after was taken off life support and pronounced dead.

“He was different, and they tend to pick on the different ones,” a family friend said about Bell.

It’s not possible to create a utopian, 100 percent safe environment on the Internet. But what we can do is give young members of the LGBT community a safe space where they can educate themselves and others.

Kristin Russo and Dannielle Owens-Reid, the owners of the popular Tumblr Everyone Is Gay, make it a point to provide an open forum to those anxious and often distressed voices.

Since launching the blog three years ago, they’ve noticed how much of a problem cyberbullying is and why it continues to grow, especially among middle and high schoolers. And it’s an epidemic that has no boundaries.

In a 2010 survey of several hundred gay high schoolers, 54 percent admitted to being bullied online within the previous 30 days. As in Jardin Bell’s case, the bullying can lead to suicide.

Russo says messages of support should originate from the students themselves in open conversations. But even that can be problematic: Lots of bullying comes from other gay youth protective of their territory and wary of how they’re characterized.

In Russo’s inbox, it’s not all, “‘Oh, you’re gay, and gay is stupid,'” she says, “but from [people] actually within in the community of people saying ‘you’re not gay enough,’ ‘you’re not trans enough,’ or ‘you’re not this enough or this thing enough.'”

They’re newly comfortable with a group, says Owens-Reid, and they fear outsiders and even more ridicule. “If you ‘other’ someone, you won’t be ‘othered,'” she explained to me over the phone. “Their immediate reaction is, ‘No, no, you’re not like us! I spent my whole life trying to fit into this group and you have to be like us to fit in to this group.'”

Russo and Owens-Reid often see bullies creating fake profiles on Facebook and adding their friends, spreading false and hurtful information through rumors. It’s not limited to the Internet, either: At their SXSW panel on Sunday, March 10, the women mentioned a teen they interviewed who received anonymous texts and threats several times.

“There’s all these levels of how they are using it to tear people down or exert their power over each other,” said Russo.

The Internet’s anonymous cloak allows bullies free rein over hurtful words and methods. Russo said “people use it and abuse it,” but the social networks can’t be held accountable for this.

“It could be better than it is, but that they all agree it’s not the responsibility of the people who create social media environments … to deal with what’s happening on those forums,” said Russo, mentioning that fringing upon First Amendment rights could be a territory that the companies, like Tumblr and Twitter, don’t want to wade into.

How, then, do you deal with it?

“The biggest way we can take action is by organizing youth to advocate for themselves and others around them,” Russo said, explaining how she and Owens-Reid travel to schools and universities across the country to promote tolerance.

“Danielle and I have a great platform, we have people much younger who look up to us. … But going into a large school setting a message is going to be heard louder when its their peers saying ‘these things happen when you take these actions.’

“That’s the biggest way it can be dealt with,” she admitted.