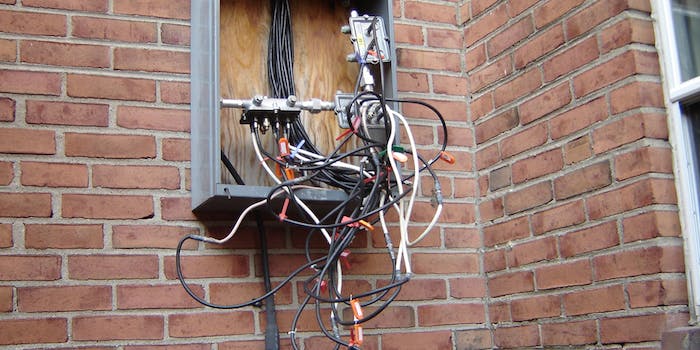 Comcast says it supports net neutrality—but that's only because it has to.

If you support net neutrality and an open Internet, support Comcast’s merger with Time Warner Cable.

That’s the argument Comcast presented to the Federal Communications Commission (FCC) Tuesday, in its official push to gobble up the second largest cable provider in the United States for $45.2 billion. It is also one of the most glaring (and ingenious) examples of corporate hypocrisy this side of a McDonald’s salad.

Despite its overt challenge to net neutrality principles in Comcast, the company maintained that its case wasn’t about net neutrality at all, as David L. Cohen, Comcast’s head of public policy, wrote ahead of the court’s ruling:

Some activists insist that Comcast’s challenge to the FCC is ‘a fight about net neutrality.’ That’s simply not true. The primary basis for our challenge, and the basis on which we hope the court will decide this case, is that no federal agency can subject any company or individual to sanctions for violation of federal standards when there was no law in the first place. This is a basic issue of fair notice, regardless of the issue at stake. So it shouldn’t matter whether you are for or against ‘net neutrality’ regulation—this is simply not the way the government should conduct its business.

In other words, Comcast wasn’t fighting against net neutrality. It was fighting for fairness and the rule of law, just as its merger with Time Warner Cable is a generous attempt “to bring millions of customers under the [FCC’s] Open Internet rules,” as Cohen characterized the merger this week.

Which brings us to the reason it is so difficult to argue against Comcast’s embrace of net neutrality. As Cohen correctly states, “Comcast is the only company in America that is legally bound by the FCC’s now vacated Open Internet rules,” which were shot down by the courts in February. A successful merger with Time Warner means its 11.4 million customers would enjoy greater net neutrality protections, too.

Here again, however, we see Comcast falsely flying the net neutrality flag. The only reason Comcast seemingly abides by open Internet principles is because it is legally required to do so, under the terms of its $30 billion acquisition of NBCUniversal. Despite that requirement, Comcast is testing the limits of its “commitment” to net neutrality by signing a deal with Netflix that lets the streaming video provider tap directly into Comcast’s pipes—a deal that, as Timothy B. Lee described it in the Washington Post, renders net neutrality “obsolete” because it opens the floodgate to preferential treatment for certain types Internet traffic from an ISP. That is literally the opposite of net neutrality.

Strictly speaking, Internet industry analysts argue, the Netflix-Comcast deal has zero to do with net neutrality. And Comcast, I’m sure, agrees. Netflix is simply paying Comcast for a service it was already getting from a third-party company, just as Microsoft and Google pay Comcast for the same direct access. For this to be a violation of net neutrality principles, as defined in the narrowest way possible, Comcast would have to demand payment from Netflix in order to reach Comcast’s customers. Instead, Netflix appears to have made this deal by its own volition, even though CEO Reed Hastings previously warned users of exactly these kinds of deals:

Once Netflix agrees to pay the ISP interconnection fees… sufficient capacity is made available and high quality service for consumers is restored. If this kind of leverage is effective against Netflix, which is pretty large, imagine the plight of smaller services today and in the future.

Without strong net neutrality, big ISPs can demand potentially escalating fees for the interconnection required to deliver high quality service. The big ISPs can make these demands—driving up costs and prices for everyone else—because of their market position.

Leverage and market position—those are the keywords to keep in mind when considering the consequences of a successful Comcast-Time Warner merger, and the words Comcast would like removed from the net neutrality debate. That’s because, if its deal goes through, Comcast would control a whopping 40 percent of high-speed broadband in the U.S., making it the nation’s unrivaled gatekeeper of the Internet. There would be nothing neutral about Comcast’s heavily leveraged market position.

It is for this reason that more than 50 public interest groups sent a letter to FCC Chairman Tom Wheeler and Attorney General Eric Holder this week, petitioning them to kill the Comcast-Time Warner deal.

“The Comcast-Time Warner Cable merger would give Comcast unthinkable gatekeeper power over our commercial, social and civic lives,” the groups wrote. “Everyone from the biggest business to the smallest startup, from elected officials to everyday people, would have to cross through Comcast’s gates.”

Comcast and others who believe “open Internet” means an Internet free of government regulation, even regulation that mandates openness, will continue to attempt to restrict the net neutrality debate to narrow terms, while also claiming to be the open Internet’s biggest champion. Fine. That’s what their business goals mandate. The goal for the rest of us, who depend on an open Internet to flourish, is to reject their definition.