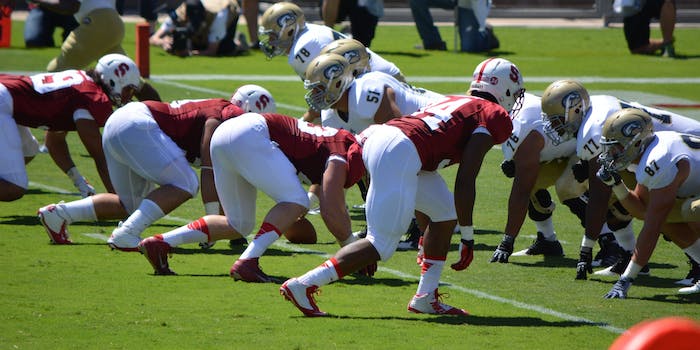 Arkansas State football player fakes fainting, no one falls for it

It wasn't Arkansas State's finest moment, but it was their most melodramatic.

In the pantheon of college football, there are some plays so bold and daring that that defy all odds. Arkansas State’s fake punt pass turned pass out over the weekend is not one of those plays.

In the second quarter of the game against Miami, the Red Wolves brought out the theatrics a little too early considering they were at least two touchdowns away from even tying things up. Down 20-7 against the Hurricanes, Arkansas sampled a dramatic ploy from the Real Housewives playbook, by having reciever Booker Mays collapse on the field. Head coach Blake Anderson has to be a reality TV fan considered that he approved this trust-fall-exercise gone bad.

The whole thing goes beyond a comedy of errors and ventures into train wreck territory given that punter Luke Ferguson threw an interception. Not to mention that once Booker Mays awoke from the grave, realizing that he should have taken some acting classes before attempting such a maneuver, he was sacked. Hard.

Miami went on to win the game 40-21 and Arkansas went back to the drawing board to perfect their melodramatic version of a Hail Mary.