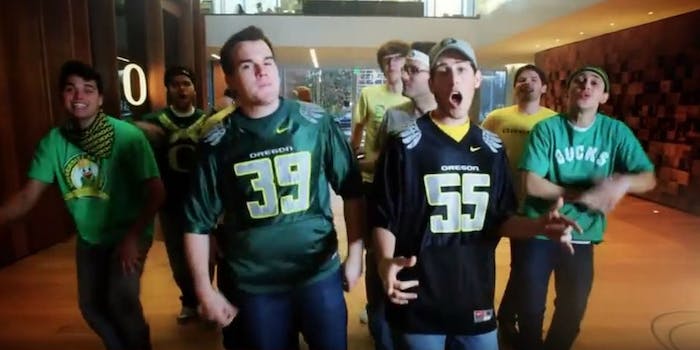 Get ready to laugh (or cringe).

The first weekend of college football is upon us, and thus begins another season of tailgating, imbibing too many adult beverages, dealing with the hangover afterward, and watching as your favorite team thrashes or gets thrashed by your most hated rival.

It’s wonderful for the stomach, the liver, the mind, and the soul.

But not everything your favorite team does should fill you with pride. Sometimes, embarrassing recruitment videos get made, and sometimes famous coaches are caught on video being naughty.

Yet, for some reason, we watch these mortifying pieces of history until our eyes explode and our ears fill with blood (and because of the magic of YouTube, they can never be forgotten).

You know about the Associated Press top 25 list, but after much research and even more reflection, the Daily Dot has put together its own, slightly different top 25 list: The 25 most embarrassing videos ever to emerge from these hallowed halls of academic learning football factories.

Actually, this video isn’t embarrassing at all, which is why the Wildcats come in at No. 25. In reality, I could watch this post-practice dance-off all day long.

I searched for many minutes, but I couldn’t find any embarrassing videos from Boise State. So I’ll post this video on two of the greatest plays in recent college football history, both vs. Oklahoma in the 2007 Fiesta Bowl.

Come on Tennessee. Control your mascot.

Early in the fourth quarter of Ohio State’s eventual national championship victory against Alabama last season, ESPN cameras caught a female student rubbing the neck of the dude sitting next to her; she then abruptly stopped and looked around nervously as if she’d been caught doing something nefarious. That led to speculation that she was massaging her side piece until she realized the cameras had been trained upon her, and that her boyfriend, innocently watching from home, would see her.

But as Gawker later noted, that dude was her boyfriend. Good for the couple, but not good enough to land the Buckeyes any higher on this list.

There are plenty of reasons not to root for the Fighting Irish. There are, in fact, so many damn reasons that listing them here would be enough to fill a book of impressive thickness. But here’s one tiny reason: Taylor Swift’s brother, Austin, graduated from Notre Dame this past May.

By itself, that revelation is hardly newsworthy. But when one of the biggest pop stars in the world makes an Instagram video of his graduation and then casts herself in the starring role, well, that’s just too much. Boo, Taylor Swift. And boo, Notre Dame—by brotherly association.

It’s bad when your (seemingly) not-fake marriage proposal in front of 10,000 Bruins fans is rejected. It’s real bad when your girlfriend former girlfriend tells you she wasn’t interested in marriage because your penis is too small. And it’s really, really bad when you make a documentary based on the preceding two problems.

The school received plenty of backlash when the Alpha Phi sorority released this recruitment video last month, featuring plenty of not-so diverse pretty people. As the Daily Dot’s Marisa Kabas wrote, the video “beckons us into its bleached-blonde, white-skinned universe and presents it as a place full of beauty and void of substance.”

This story has dominated much of the airwaves in the lead-up to college football season. But that’s to be expected when a major college coach like Steve Sarkisian gets reportedly drunk at his team’s preseason kickoff, drops an F-bomb, and disparages a few of the Trojans’ opponents.

It embarrassed the entire school, and USC athletic director Pat Haden had to release a statement saying, “I met with Coach Sarkisian and I expressed my disappointment in the way he represented himself and the University at our Salute To Troy event. … I am confident he heard my message loud and clear.”

Of course there's video of the (very public and reportedly drunken) Sarkisian f-bomb, as if you had to ask. https://t.co/mQijmoHyFj

You’re supposed to pay for those crab legs before you walk out of the grocery store with them. Isn’t that right, #FSUTwitter?

Remember when Miley Cyrus‘ “Party in the USA” was a thing? You know how people want to forget the hit that rocked this country like a linebacker diving headfirst into a quarterback’s sternum? That’s kind of how UGA alumni, myself included, feel whenever they remember that this monstrosity was made. Even if coach Mark Richt makes a supposedly voluntary cameo (luckily for him, he can always fall back on the coolness of his high-dive videos), this video was a complete disaster.