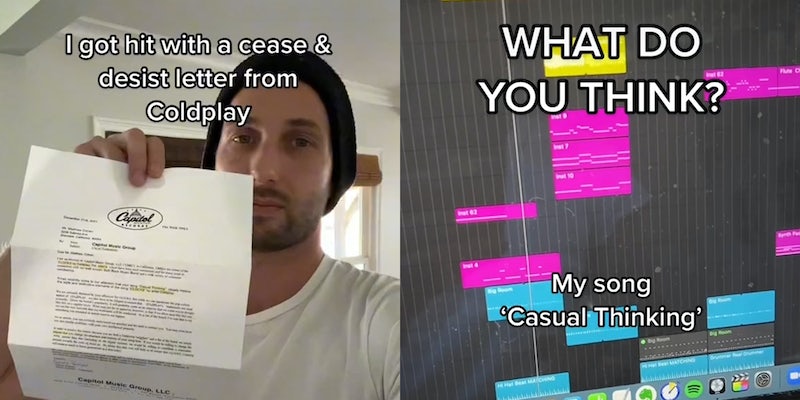 Did this TikTok singer fake a lawsuit from Coldplay for clout? (Updated: Almost surely, yes)

'Don’t have the funds to fight this lawsuit in court.'

A TikToker has gone viral on the platform after posting what he alleges is a cease and desist letter from a lawyer representing the band Coldplay.

The video claims that user and musician Matty Co. (@itsmattyco) received the cease and desist letter owing to his own song’s resemblance to the Coldplay track “Clocks.” He then plays both track so TikTokers can hear the difference between them.

“Help me out everyone,” he writes in the video’s caption. “don’t have the funds to fight this lawsuit in court and anyone can tell it’s totally a different song.”

This immediately caught the attention of many on the platform, including people in the industry like ​​Mason Ramsey, who simply wrote: “ummmmm.”

However, there are many reasons to be suspicious of Matty’s TikTok.

First, there’s a section at the bottom that lists the company “Capitol Music Group, LLC,” with an address given in San Rafael, California.

However, there’s no LLC of that name registered in California. Additionally, calling the phone number below that name—which is suspiciously cut off at the end of the page—leads to a disconnected line.

Furthermore, the prospect that Capitol Music Group would have already discovered Matty’s song and noted its alleged similarity to Coldplay is difficult to believe given the song currently only has just over a thousand plays on YouTube, and less than a thousand plays since its Oct. 15, 2021 release on Spotify. That said, there is a chance that the song was automatically flagged by an algorithm, with the cease and desist sent soon after.

There is also a question about whether a trademark lawyer like Christy Susman would be dealing with cases that seem more related to copyright. Simply put, the letter appears to be alleging that Matty has interpolated Coldplay’s song. This would be a copyright issue, not a trademark issue.

Finally—and most convincingly—the letter seems to be a near identical copy of this viral Cease and Desist letter sent to author Patrick Wensink by Jack Daniel’s.

​This explains the odd font changes throughout the letter, the strange word spacing, the incorrect business listing, the use of trademark instead of copyright, the cut-off phone number, and many other issues visible in the letter.

It’s unclear whether this is a joke that simply went too far, or if Matty genuinely attempted to deceive people to promote his music.

It could be, as one user speculated, merely “bait to get you to listen to his song.”

Update 2:44pm CT, March 16: Susman tells the Daily Dot that she did not send a cease and desist letter to this musician.