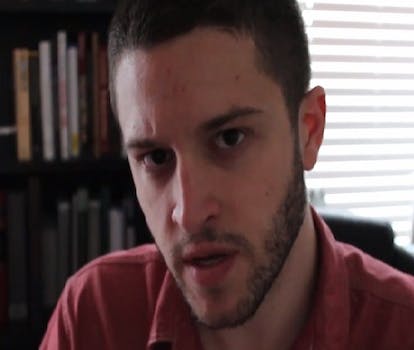 The 25-year-old face of Defense Distributed has moved on from guns.

Cody Wilson has moved on from guns.

The 25-year-old face of Defense Distributed, a libertarian-leaning organization that hopes to build the world’s first gun comprised entirely of 3-D-printed components, revealed via a YouTube video that he’s launching a DefCad.com, a new for-profit and uncensored search engine for 3-D printing files.

The announcement came on the same day that Wilson spoke at the South by Southwest Interactive Conference and Festival about his controversial mission.

DefCad.com will be an evolved version of DefCad.org, a makeshift file hosting page Wilson and Defense Distributed launched in December 2012 as a response to Thingiverse’s decision to delete any gun-related computer-aided design (CAD) files from its own site.

The new site will also be a search engine for all types of 3-D printable files—not just gun-related ones—and promises never to censor or delete any content regardless of how controversial it might be, a clear knock on Thingiverse.

That disdain for Thingiverse, its parent company MakerBot Industries, and its CEO Bre Pettis is apparent in the video.

“When this guy decided that ‘radically open’ meant not so radical, not so open, DefCad was born,” Wilson states over aphoto of Pettis’s face.

But DefCad.com, according to Wilson, is not a Thingiverse substitute or competitor.

“This isn’t even us going toe-to-toe with Thingiverse,” he told the Daily Dot over the phone. “That’d be paying them too high of a compliment.”

He added, “They’ve already said and told us that they don’t want to engage with us. We’re filling a void that they refuse to fill.”

The move to expand beyond the gun is very much in line with Wilson’s vision of  “Napsterizing” the world. It’s also proof that he and Defense Distributed are about more than just promoting a pro-gun agenda.

“Our mission is to 3D scan every part in existence,” DefCad.com states in its homepage.

This includes everything from hammers and shovels to firearms and pharmaceuticals. Over time, we anticipate that our efforts will move the frontiers of 3D printing forward, as the requirements of real products will produce rapid improvements in 3D printing speed and material quality.

Wilson is employing a crowdfunding model to financially support his new venture. The new company is hoping to raise $100,000 in startup capital in 30 days.

DefCad.com is offering Kickstarter-like rewards to its potential backers. The most interesting of these comes at the $500 level. For that amount, DefCad.com will send you what they call the “Offline Cache,” a USB key dogtag that contains every single one of their printable files.

Wilson’s new venture  has embraced the decentralized cryptocurrency BitCoin as a method of payment, which isn’t particularly surprising given the fact that Wilson has self-identified as a “crypto-anarchist.”

In the first day of the crowdfunding effort, DefCad.com raised $825 from 21 backers, less than one percent of the company’s stated goal.