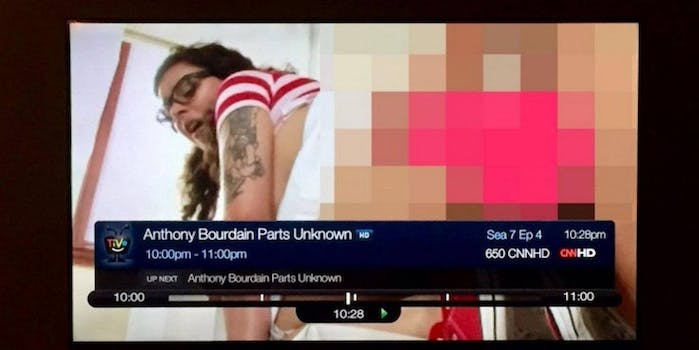 Is this really something to be thankful for?

Twitter user @solikearose tweeted screenshots of the alleged incident, which outlets were quick to pick up on the supposed blunder because that shit sounds hilarious. More cautious sources like Gizmodo and the Verge instead waited for the fallout before posting anything on what’s been dubbed #bourdainporn.

At last, CNN found its true self in porn!#BourdainPorn pic.twitter.com/sK86LQ9oPo

And fallout there was! As writer Luke O’Neil pointed out, do y’all really think that if CNN aired half an hour of NSFW content, which is what @solikearose claimed, only one person would take to the internet to share screenshots of it?

The woman who reported it sent me another pic. Again, sort of believe her, but no way only 1 person saw this if it was Boston wide CNN. pic.twitter.com/ZsOuLLsE84

Got a statement from RCN Boston pic.twitter.com/QnTSG1D8v5

CNN PR got back to me: pic.twitter.com/X9JsT9KI5l

It’s worth noting that the screenshot itself also included subtle clues pointing toward this being nothing more than a hoax. Despite the Parts Unknown marathon itself being real, @solikearose’s images show the season and episode info for the episode just before the 1opm time slot. Season 7, episode 4 of Parts Unknown was dedicated to the state of Montana and aired at 9pm ET. The 10pm episode comes from the show’s second season.

@solikearose does, however, get the channel number right as well as the fact that it’s being broadcast in HD. As of this writing, the Twitter user has yet to publicly address the matter and has since locked down their account. Their bio now includes the line “sorry guys, weirdos sending me hate mail in the wake of #bourdainporn.”