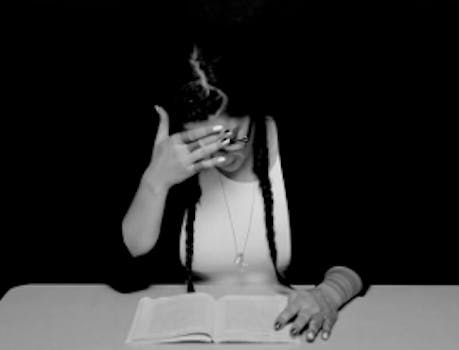 Amanda gets off to Anthony Burgess' ultraviolent novel in Hysterical Literature #7.

When Amanda’s orgasm finally hits her in Session Seven of Clayton Cubitt’s “Hysterical Literature,” the outburst is as sudden as an attack of ultraviolence in the book from which she’s reading, the classic counterculture manifesto A Clockwork Orange.

Continuing his exploration into the eroticism of language and the mechanics of female desire, Cubitt plumbs new depths both above and below the strategically placed table. Amanda’s choice to read from Anthony Burgess’s linguistic marvel—the delinquents in A Clockwork Orange speak a hybrid slang forged out of dystopia, social alienation and drug-fueled frenzy—highlights the ways in which the words themselves can become the pleasure triggers that eventually tip her over the edge.

Amanda reads from the famous scene in which Burgess’s anti-hero, Alex, is experimented on by the government in a bizarre form of mental conditioning. In a sequence full of Burgess’s invented words, Alex describes being strapped to a chair and forced to watch terrifying scenes of human cruelty, war crime, and other atrocities. “I would have liked much better to have a nice quiet spatchka on the bed, nice and quiet and all on my oddy knocky,” he tells us. Luckily for us, Amanda chose not to nap at home but to share her reading.

Cubitt’s series is a social experiment which contradicts completely with the social experiment described in A Clockwork Orange, but the overlapping pleasure Amanda receives from both the language of the book and what’s happening to her under the table causes the two to intersect in all the right ways.

“Did I hurt you?” She asks the unseen person under the table when it’s all over—perhaps the most appropriate way a session on A Clockwork Orange could ever possibly end.