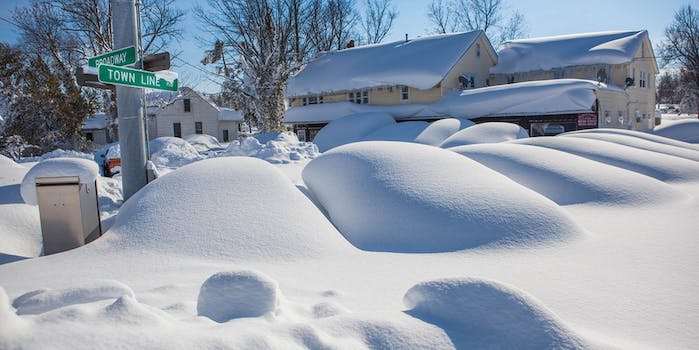 Last week, Buffalo, N.Y. was besieged by a terrifying snowstorm and high winds, in a dramatic weather incident that went viral as the world learned what a city under seven feet of lake-effect snow looks like. The city’s plight is trending across social networks, and in many comment sections, a common debate is playing out. One side says, “This is just extreme weather” (or, in some cases, “This is a sign of the apocalypse”), while the other insists, “No, this is climate change.” Ironically, it is the weather itself that’s driving our lack of ability to cope with the concept of climate change; members of the public looking at both snowstorms and droughts, for example, have difficulty grasping that these incidents are part of a larger pattern. That’s being compounded by the politicization of climate change.

A growing number of scientists are speaking out about climate change, but numerous surveys indicate that roughly 25 percent of the population does not believe in climate change. In fact, the number of people who believe in climate change is actually dropping. This denial might be a case of head in the sand syndrome, or discomfort with the implications of admitting the presence of a phenomenon that requires action, but there’s something more to it.

The problems for Buffalo started last week, when snow and high winds began dumping on the city. Then, the National Weather Service issued a flooding advisory amidst warnings of rising temperatures and clogged storm drains. As if Buffalo didn’t have enough problems, yet more rain and high winds are in the forecast, which could cause power outages, as well as the potential for billions of dollars worth of damages.

As heavy weather hit Buffalo, it also hit social media, thanks to the fact that it was so unusual; whiteouts typically occur in December and January. Now-iconic images of neighbors teaming up to deal with snow and the lake-effect storm that swept across the city immediately spread around social media because they were so terrifying, and they also looked so intense. Many images depicted the wall of weather sweeping across the lake and enveloping the city, while others showed communities digging out buried homes, cars, and driveways. Some faked images even spread around, illustrating how much the situation captivated the public.

It’s not the first time images of significant weather events have mesmerized the public, and the response is often the same: Such events disprove climate change theory.

Twitter quickly reacted as users wanted to know: “Where’s the global warming?” Skeptics like these believe that researchers need to look at a longer geologic span of time to justify their claims that the climate is significantly changing. They also suggest that changes in global temperature have occurred historically—and that there is nothing unusual about our modern situation. Others claim that rising CO2 levels caused by industrialization, the culprit many scientists point to for increases in global temperatures, aren’t related to environmental trends, attempting to debunk the theory that humans are causing climate change.

Or they say that climate change models haven’t been entirely accurate, ignoring the fact that scientific models and projections are a hypothesis that evolves with more information. Deniers like Sen. Jim Inhofe (R-Okla.) cut right to the chase: God controls the weather.

[T]he Genesis 8:22 that I use in there is that ‘as long as the earth remains there will be seed time and harvest, cold and heat, winter and summer, day and night.’ My point is, God’s still up there. The arrogance of people to think that we, human beings, would be able to change what He is doing in the climate is to me outrageous.

More moderate deniers, such as Sen. John Thune (R-S.D.) admit that the globe is warming—but deny human involvement. They often draw upon the small number of researchers who have reservations about anthropogenic (i.e., manmade) changes—three percent, according to an evaluation of studies on the subject.

Denialism is being bolstered by an unfortunate confusion of language that’s become a public meme: Global warming versus climate change. Global warming refers to the steady increase in average temperatures across the globe. These are following a so-called “hockey stick” effect, rising rapidly in pace with industrialization and increased greenhouse gas emissions. Climate change (defined as the global shifting in weather patterns) is the result.

In one example of how climate change affects the environment, the interaction between ocean temperatures and wind patterns appears to be changing because of shifts in ocean temperatures and glacial runoff, among other climate change-related factors. This is causing changes in rainfall worldwide as some areas become drought-stricken while others flood.

The response to severe weather from alarmed members of the public would seem to suggest that people believe in climate change, but instead, only 75 percent of the population does, and of that number, not all believe the evidence is solid. The bulk of scientific research, and the science community, indicate that climate change is real. Moreover, images of extraordinarily severe weather provide documentation of what climate change looks like and the fact that it’s already causing palpable effects.

The push and pull when it comes to believing climate change is an issue and denying it involves a stark divide between liberals and conservatives, with liberals tending to side with science, while conservatives do not. Riley E. Dunlap, writing for Gallup, demonstrates the difference when it comes to views on global warming and climate change: “For global warming, Democrats are 47 points more likely to worry than are Republicans (83 percent vs. 36 percent), while for climate change they are 44 points more likely to worry (83 percent vs. 39 percent).”

Global warming has, thus, become a partisan issue, which is precisely why a growing percentage of the population doesn’t believe in it.

At The Economist, E.G. further details the problem at hand. “The fact that Democrats are always hammering on about climate change and Republicans aren’t suggests that this is a political issue, not a scientific one. This creates a feedback loop: if climate change were real, why is it so polarising? Because it’s so polarising, it must be slightly suspicious.”

Gayathri Vaidyanathan for ClimateWire adds, “American minds have been poisoned by climate contrarians like Frank Luntz, a Republican strategist under President George W. Bush, who advised skeptics to create an illusion of scientific discord and challenge established climate scientists.” This creates an environment where the voices of a few social influencers can have considerable sway.

Tackling the issue of conservative opposition and the politicization of climate change is tricky, and it’s key to getting people to care about climate change. The first step involves separating out conservative elements and acknowledging that not all think the same way. A Pew poll from 2013 illustrates that extremists like the Tea Party are far less likely (25 percent) to believe in global warming than other Republicans (61 percent). Lawmakers like Susan Collins (R-Maine) do believe in climate change, though that doesn’t necessarily mean they advocate for progressive policies. Likewise, Chris Smith and Jon Huntsman have discussed the subject during their political careers.

Notably, in an interview with PolitiFact, former Rep. Jim Greenwood (R-Pa.) said: “There used to be a lot more of us. A lot of us were very green in our voting records. That has changed. I think it’s part of the phenomenon of the polarization of the Congress.” It’s a reflection of how the issue has become more political than scientific.

“[Y]ou’re going to be hard-pressed to find too many Republican politicians who are willing to take on the issue, or even vote in favor of any measure that might address it,” writes Paul Waldman at the Washington Post, describing the current political situation. While believing that climate change exists is a political liability, few conservatives are willing to stick their necks out, which reinforces the attitude among conservatives that climate change isn’t an issue.

By taking the politics out of climate change, we can focus on doing something about it. People encountering images of climate change on social media approach them with preconceived notions; either they’re proofs that the science is valid, or further evidence that “global warming” can’t possibly be real. To address the climate change gap, we must decouple it from political identities, and this includes stepping back from high-handed liberal language as well. No more scaremongering or political posturing: It’s time to put down the partisan boxing gloves and get to work.