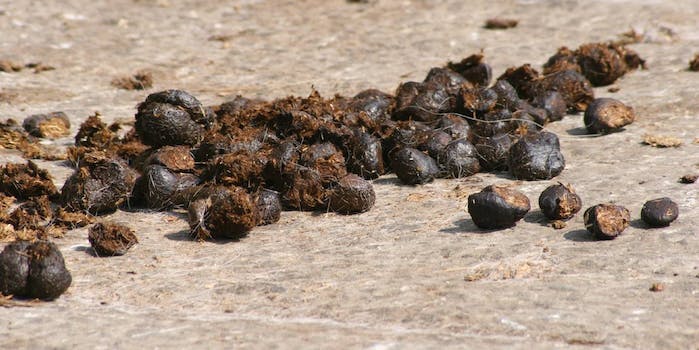 The Cleveland Cavaliers earned their first NBA championship in team history on Sunday night after besting the Warriors in a winner-take-all Game 7. Fans were so excited they allegedly stole a firetruck to commemorate the win.

Cleveland had to act fast to ensure that Cavs fans didn’t destroy their home turf. A parade was held on Wednesday night and—to the amazement of officials—instead of destroying public property, fans pretty much just destroyed themselves.

People partied everywhere, including every eyesore of a parking garage dotting the downtown area. Folks climbed buildings in hopes of catching LeBron cheesin’ and J.R. Smith still refusing to wear a shirt.

Cleveland #Cavaliers fans watch from a parking garage as the car carrying LeBron James passes during a parade. pic.twitter.com/66CWENoT9y

The real MVP of doing it Cleveland style wasn’t high up in the sky, however. He was on the ground and with the people. And he was eating horse shit.

Like all sports teams in Cleveland, the Cavs have been anything but good since their founding in 1970. Be it in baseball, football, or basketball, fans have been figuratively eating shit for decades. Perhaps actually just saying “fuck it” and going all-in on excrement is that much better.

Certainly, it’s not for this fan’s health. According to the all-knowing garbage oracle Yahoo! Answers, ingesting horse shit is bad for you because eating shit is always bad for you… unless the horse is healthy. In which case, time to turn up.