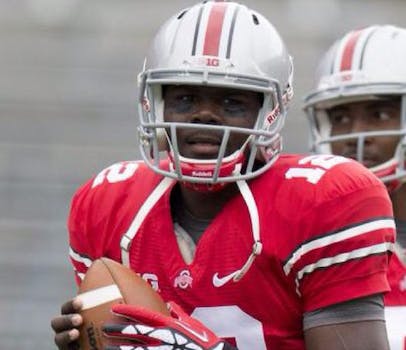 Ohio State QB Cardale Jones, famous for declaring "Classes are pointless!" on Twitter, has a new account, and he's started tweeting about going to class.

The Ohio State University quarterback who notoriously claimed on Twitter that “classes are POINTLESS” and that he “we ain’t come to play SCHOOL” has apparently turned a new leaf.

In a drastic turnaround, Cardale Jones now frequently tells his followers how much he enjoys being a student.

“Off to class I go,” he tweeted Monday morning.

“I love the first day of class,” he updated 45 minutes later.

The account, @12Gauge_, is a new one: He deleted @cordale10 in October after the considerable backlash at his preference for the football life over academia. @12Gauge_ was created in December. It’s unconfirmed, but appears to really be Jones, as the account is followed by several players and Columbus-based sportswriters.

One of that account’s first tweets came as the fall semester wrapped up. “Got a good feeling walking out that final,” he posted December 12.

Jones seemed confused Wednesday, when fellow Twitter users called him out for tweeting “Student Before Athlete,” with an image of a pencil.

When one fan, @diabolicalh4ter, said he would “never forget this tweet,” in reference to his “classes are POINTLESS” tweet,” Jones acknowledged he was stuck with the association.

“you and alot more people, by hey we live and we learn,” he responded.