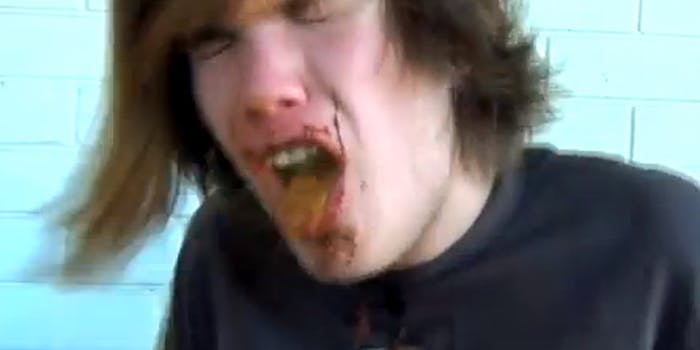 The Cinnamon Challenge may cause pulmonary fibrosis

A word of caution regarding the Cinnamon Challenge, kids: It might just kill you.

A word of caution about the Cinnamon Challenge, kids: It might just kill you.

A new study to be published Monday suggests that attempts to complete the Cinnamon Challenge—a YouTube-originating stunt that calls for someone to record themselves trying to swallow a spoonful of cinnamon without any welcome supplements like water—can result in chronic choking, inflamed, and scarred esophageal tissue and, potentially, serious lung diseases like pulmonary fibrosis and emphysema.

The report, to be published in the May edition of the Pediatrics health journal, comes directed by University of Miami professor Dr. Steven Lipshultz and gathered its data based on systematic testing with lab rats. Lipschultz would give the rats a sniff of cinnamon powder and then follow them as they aged.

“The cinnamon would coat the airways and the lungs (of the animals) and it would lead to inflammation,” he said. “It wouldn’t stop there. The inflammation led to scarring in the lungs, something called pulmonary fibrosis.”

Pulmonary fibrosis, for those wondering about the rats, is the formation of excess fibrous connective tissue in the lungs. The Pulmonary Fibrosis Foundation describes the ailment as a “scarring of the lung.” It’s something you might have if you’ve experienced shortness of breath, a chronic dry hack, serious fatigue, or sustained chest discomfort. (Or if you’ve just inhaled a gallon of dry cinnamon.)

I tried the Cinnamon Challenge last August and failed miserably, so I can say with certain authority that the whole operation is terrible, from the smelling to the spooning to the excess cinnamoning. I gagged within milliseconds. I coughed up a wad of fruit smoothie.

It basically ruined me from eating my grandmother’s Polish kugel ever again, too, and for that, I’m particularly sorry.