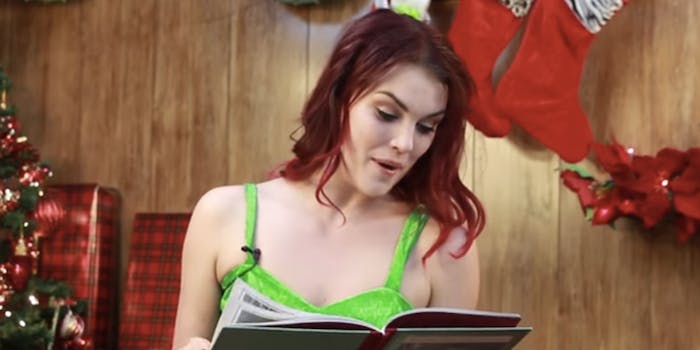 What's next, dudes singing "Jingle Bells" while using a Fleshlight?

The bros at the YouTube channel Simple Pickup follow a relatively simple formula: Grab a few scantily clad hot girls, debase them in various mildly amusing ways, and watch the pageviews roll in.

When it comes down to it, Simple Pickup’s latest NSFW video, which features models reading “’Twas the Night Before Christmas” on a Sybian, is the same ol’ song-and-dance—with one exception: It’s actually kinda funny.

If you’re not familiar with Howard Stern or the world of high-end novelty adult toys, a quick primer: Basically, a Sybian is a ride-on female pleasure device. It looks kinda like a balance beam, except instead of doing jump tucks on it, you sit on it, and it gives you an orgasm.

Simple Pickup using Sybians in their videos is nothing new: Earlier this year, the team asked women to ride the Sybian in public to raise money to fight female genital mutilation, which many argued both failed to raise awareness of FGM and trivialized the issue.

But in this video, there’s no pseudo-charitable front. It’s just a bunch of girls dressed as sexy Santas, struggling to say, “While visions of sugarplums danced in their heads” without moaning and groaning, and it’s actually pretty funny. It’s also pretty NSFW, so if your Grinch boss is making you come into the office this week, try not to watch it in front of him.