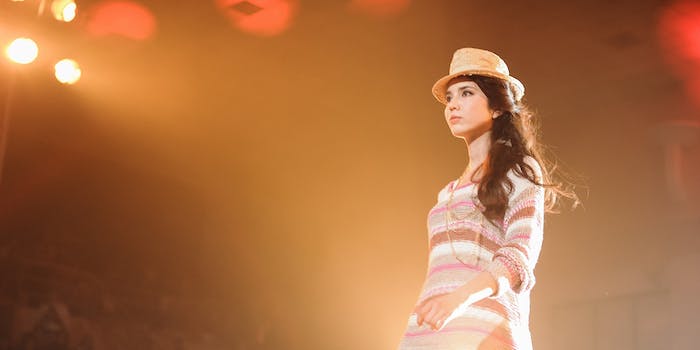 Chrissy Teigen recently recounted that she was fired from a Forever 21 shoot for being "too fat." I wasn't surprised.

I don’t remember the exact day I decided I wasn’t going to care anymore about my modeling contract. In 2011, when I walked into an open call at one of the best, most prestigious Chicago modeling agencies, I felt confident. I’d just been to China with Fashion TV Asia; I’d worked all types of different jobs and had recently started sending out a portfolio of test shoot images that were being received very well. I knew myself and I knew what I could do, and most importantly, I was having a good month when it came to my weight. I was starting to feel like a real model.

The bikini snapshots they requested had gotten me here, which I assumed would be the hardest part. So when I sat down with the head of the runway division, who told me they wanted to offer me a two-year contract, I was thrilled. I had made the cut— with what I thought was the right agency. We ran through the details of what I’d need to do to get started and then came the question: “So, right now, do you feel you’re at your ideal weight?”

I thought quickly. In reality, I’d developed a strict diet and exercise regimen over the last six months in Bangkok, during which I’d been actively working as a model and doing some acting as well. I thought I had maybe put on a few pounds since moving back to the States, but I also knew by this point that my bones were structured in such a way that I wouldn’t be able to get much thinner.

She told me that she thought I looked great, but that the measurements for runway models weren’t super flexible—if I could get my waist down two more inches and my hips down, too, that’d be best. If I needed recommendations for personal trainers that the agency used, I could ask her. The whole time, she used a lot of circular language, though I don’t think her intent was to deceive. She said that I should do a test shoot with such-and-such photographer “when I was settled,” when I was “body-ready.”

So I told her that right then I was a little bigger than my ideal; I’d been unable to get to the gym what with the craziness of getting acclimated in the States, but it wouldn’t be a problem. Never mind that I was already a very disordered eater and then I had a tendency to obsess, perhaps unhealthily. Never mind that in addition to the strict diet and exercise routine I had gotten used to using chemicals in certain ways to help with keeping my weight down.

I left the agency feeling a weird mix of two emotions. On the one hand, I was elated. I was not just enough for modeling in Southeast Asia, I was (thin, pretty, tall) enough to be a model in the United States. Plus, my ultimate goal was to break into acting, and this agency was connected to the best acting representation in the city. On the other hand, I had literally no idea how I could shave much more than another centimeter or two off my waist or hips, and even that would take a lot of work. I’d put a lot of pressure on myself while working in Bangkok, and obviously I was expected to be thin and was often told as much, but it was never to this degree.

Supermodel Chrissy Teigen recently told DuJour that she was fired from a Forever 21 shoot early in her career. When she arrived at the shoot, they took her photo and immediately fired it off to her agency, who then called Teigen on her mobile phone to tell her she had to scram and get her measurements taken: she was “too fat” for the shoot.

When I read Teigen’s story, I wasn’t very surprised—and I don’t think anyone else was either. Teigen recounted the experience without a lot of tears or dramatics, and even called the retailer out for sucking royally. I’m glad for stories like these, glad that it warrants reposting and discourse, but I wonder if the conversation about the complex, interwoven threads of the modeling industry, the impossible standards it upholds, its icons who embody them, and the way women think about themselves and their bodies is ready to be so vague. It’s almost as though we know enough to know too much, and that because we know this much, we know enough to move away from it.

In 2004, Unilever launched the Dove Campaign for Real Beauty. My initial viewing of 2006’s “Evolution,” the first video in the campaign, was in a Women’s Studies classroom. In my classes and elsewhere I’d come across information that pulled back the idealistic curtain shrouding the modeling industry, but I had never seen anything so powerful and with such a mainstream, big-name force behind it. “Evolution” went viral before the term even meant anything, and it began the conversation about how images of models aren’t images of people—they’re constructions.

This conversation, integral to the dismantling of the seriously skewed ideas of beauty perpetuated by representatives known as models, continues to gather steam. It’s a conversation the Internet is incubating well, as news feeds and blogs abound with Photoshop goofs and articles about thigh gaps; model Cameron Russell not long ago gave a wonderful TEDtalk in which she juxtaposed images of her self and her model self to illustrate the forces behind what we accept as perfect examples of beauty.

Before I started modeling in Thailand, I didn’t talk much about modeling. I was overweight most of my life, so when I wasn’t anymore, I pocketed my disbelief and secret pleasure at being thought of as someone who could be a model. I’d done Weight Watchers and dropped 80 pounds my senior year of college, which was a good thing, but then I met a model who thought I could be one too and set off on a three-year journey that fucked with my head and heart as I cycled viciously between bouts of emotional eating sparked by other stressors in my life and bouts of willpower and determination.

The stronger I was emotionally, the better I was at being as thin and fit as possible, and I began to associate happiness, strength, and confidence with thinness and thus success in my modeling pursuits. I buried the shame I felt when a film director who hired me only ever said to me that I needed to get fit and toned, and I continued on, only to end up in the worst place of self-hatred I’ve ever been in after signing with the Chicago agency. For a while, I felt like I had failed, but after I got some distance from it all, instead of hearing “You should be a model” and all that came with and saying nothing, I started to respond.

When I get that comment now, I tell them it’s not as glamorous as it seems. “I know too, too much about the way that industry messes with both women and men to be a part of it,” I say. And whenever I can, I start a conversation. People are shocked when they hear about it firsthand in real life. No one ever expects anyone to have walked away from being a model. I’m not sure if what I share affects them beyond changing their preexisting ideas, but it has helped me to talk about it. It’s helped me to understand, and to know better.

Where once the media was the beauty industry’s battering-ram method for the embedding of a dangerous set of impossible standards in the American mindset, we now have a conversation about what’s behind it all, behind the rubble of epidemic eating disorder rates and vanity sizing and most importantly, what women are thinking about themselves and their bodies. In 2013, Dove released “Real Beauty Sketches” and showed us how women see themselves. We may not be there yet, but the conversation has started. We’re starting to know better.