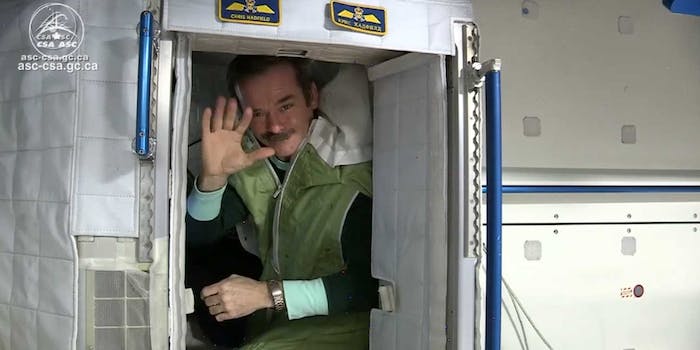 12 things Cmdr. Chris Hadfield taught us about life in space

The Internet's favorite astronaut is coming home. Here's a recap of everything Chris Hadfield taught us during his time in space.

The Internet’s favorite astronaut is about to head home.

Cmdr. Chris Hadfield has won our hearts (and the Internet) with his active social media presence throughout his mission aboard the International Space Station (ISS) for the past five months. He’s allowed us to see our planet like we’ve never seen it before through photographs, become a redditor, interacted with some of sci-fi TV’s best, tweeted live updates about the ammonia leak last week, and showed us that he’s a talented musician.

The Canadian astronaut is departing for Earth with U.S. astronaut Tom Marshburn and Russian cosmonaut Roman Romanenko at 7:08 p.m. EDT Monday, ending his stay on the ISS.

“Who’da thought that five months away from the planet would make you feel closer to it?” Hadfield reflected. “And not closer because I miss them. Just closer because seeing this this way, being able to share it through all of the media that we’ve used has allowed me to get a direct reflection back immediate from so many people that makes me feel like I’m actually there with people more. That we’re having a conversation, that this experience isn’t individual but it’s shared and it’s mutual and it’s worldwide.”

Along with sharing his view outside his window, he’s also given us a look at something that very few of us will ever see: what daily life is like in space.

Hadfield and his fellow astronauts have had to do certain activities differently in zero gravity than they do on planet Earth. With his series of tutorials and demonstrations of life aboard the ISS, he has managed to teach us what we never knew we needed to know about life in space.

Whenever we normally cut our fingernails, they’ll just fall to the ground. In zero gravity, you could breathe them in or the nail clippings can get into your eyes if you’re not careful. Hadfield heads to an air duct so that the nail clippings will get pulled into the vent.

Water acts differently in space (when you squirt it out of a container, it stays in a ball shape), so astronauts wash their hands with a small amount no-rinse body wash and dry them off with a towel.

Since crumbs won’t fall to the ground, they can be another issue on the ISS. The crew uses tortillas as an alternative to bread, and with a little honey and peanut butter, Hadfield has a delicious sandwich to eat in no time.

Even the most skilled astronauts can make a mess on the ISS, and any spill will float away until it runs into something. Just grab a rag so that it can capture the spill if it’s something like water or use baby wipes if it’s sticky. If it’s something more toxic, they use a contamination cleanup kit.

If you can’t wait five months for a haircut, head over to the International Space Salon for a buzz using a razor with a vacuum device so that the stray hairs don’t float away.

Astronauts are required to work out two hours every day in order to maintain bone and muscle mass. Good thing there’s plenty of equipment for Hadfield to get through his routine. He’s strapped in so he can run on a treadmill and uses the machinery to lift weights and perform lunges.

Without running water and a sink, brushing your teeth is one of the simpler tasks to perform in space. Get your toothbrush wet with a squirt of water, add toothpaste, brush your teeth, and swallow the toothpaste. At least toothpaste is edible.

We already know that water floats in a circular shape, but what would happen to your tears? Since there’s no gravity, they’ll just sit on your face until they get into your nose or other eye, or until you wipe them with a towel.

Unless you plan to grow out your facial hair for five months, you’ll need to shave. Use special shaving cream, wipe your razor with a towel, and make sure no stray hairs get away. But if you have a mustache like Hadfield, you’ll have to use a vacuum cleaner to groom it.

There are two sleep stations where the astronauts sleep without gravity. Put on your pajamas, zip yourself up in a sleeping bag, and let your body relax as you head to dreamland.

There’s only a limited amount of water on the ISS, and 93 percent of the station’s distilled water is reused. Filters and distillers create artificial gravity in order to recycle water for the station (even urine), which is usually more pure than the water we drink at home.

Getting sick is normal when you first arrive, so if you need to vomit, get your barf bag open, push the used bag into an attached zip-lock bag, and dispose of it in the wet trash.