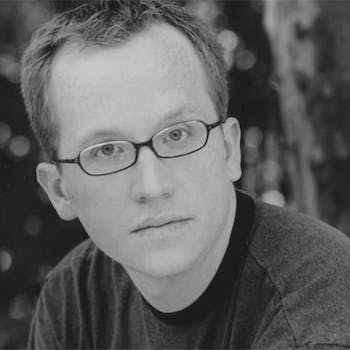 When a fan in need of help reached out to Gethard through Tumblr, the comedian responded with a heartfelt post that has since been shared hundreds of times.

Suicide is never a laughing matter, even if you’re a comedian.

Just ask funnyman Chris Gethard, a New York-based comedian who had to cope with depression and bullying through high school.

That’s exactly what one anonymous Tumblr user struggling with suicidal thoughts did Tuesday.

“I used to see your show as the last thing I had to look forward to but I haven’t even been back for months and can’t even bring myself out the door to get there without panicking,” wrote the anonymous user in a question to Gethard’s Tumblr blog. “I’d appreciate any advice really.”

Gethard immediately saw the message and stopped everything he was doing to pen an incredible 6,700 word response. The answer included personal reflections, advice on how to get help, and a heartfelt request for the person to keep living.

“The first thing I need to say is don’t do it. I repeat, whatever you are thinking about doing right now, I want to seriously implore you to not do it. I know you’re in a place where you’re scared and you’re confused and things seem like they aren’t going to get better, but I personally can promise you that things can and probably will change for the better. And the reason I can promise you this is that they got better for me. … People love you. I know they do. And you know that too. This may be a weird thing to post in a public blog, but I don’t even know who you are and I promise you that I love you. “

Gethard’s response was well received on Tumblr where it has collected 533 notes. It also received comments from people praising his candor.

“This was the most raw, powerful and downright amazing thing I have ever read. Thank you. Thank you for taking the time to reach out to a stranger, a person suffering a dark night of the soul,” bilbi0phile commented. “Once in awhile, something like this comes along to remind me of the good in this world, that kindness and decency still exist. I’m writing this with tears in my eyes and hope in my heart, and all I can say is thank you.”

Gethard has not received a reply from the troubled, anonymous fan, but says he hopes the person is OK.

“I just want to say thanks to everyone who’s been so kind about that note I posted yesterday,” he tweeted Wednesday. “I’m glad it seems to have helped some people.”