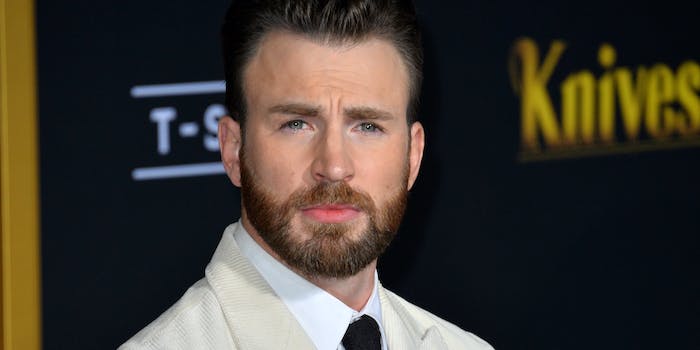 Fans encouraged people not to look for it.

It’s easy to accidentally share something on your phone that you didn’t mean to; for many of us, it’s not a big deal. But in the case of Chris Evans, an accidental share of some NSFW material on his phone turned into a trending topic this weekend.

According to Just Jared, Evans initially posted a video to Instagram Stories in which he was in the midst of playing “Heads Up,” a game that works somewhat like charades. At the end of the video, the phone switches over to Evans’ camera roll. On the camera roll, viewers were able to see a photo of a penis as well as a meme with the phrase “guard that pussy” written over a photo of Evans.

While Evans quickly deleted the video, the video—or at least news about what was on Evans’ camera roll, as many fans refused to share the video that Evans posted—quickly spread on Twitter.

Chrissy Teigen and Evans’ Marvel co-star Mark Ruffalo both offered some solace to Evans. Teigen pointed out how easy it is to accidentally leak NSFW photos while Ruffalo highlighted a silver lining about the video snafu.

For the most part, fans mostly aren’t sharing the NSFW video that Evans accidentally posted. As his name trended on Twitter, many opted to instead post photos of Evans and his dog Dodger and other wholesome photos; they also highlighted Evans’ experience with anxiety as a reason not to share them.

But what some also did while applauding efforts to bury a photo that Evans didn’t want to get out was to highlight a double-standard in how we treat celebrity nude photos. When a female celebrity’s nude photos are accidentally posted or hacked, they’re often shamed for taking a photo in the first place, whereas a response like the ones fans had to Evans should be more commonplace.

Evans has yet to address the Instagram snafu, but his younger brother Scott more or less summed it up with a bout of feigned ignorance, tweeting: “Was off social media for the day… What’d I miss?”