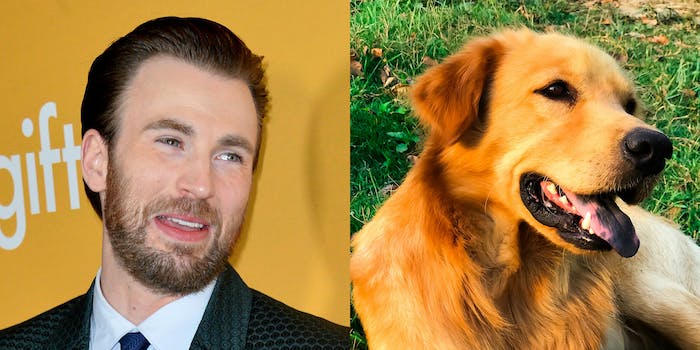 We might debate about who is the best Chris until the end of time, but Chris Evans may have emerged above the others for a very simple reason. On top of literally being Captain America at times, he also has the very key distinction of doubling as a golden retriever.

We should’ve known, really. The signs were in front of our faces the entire time.

This public service is thanks to @retrievans, a Twitter account that operates similarly to @tessasgoats in that it posts photos of Evans looking very similar to a golden retriever. The account doesn’t limit itself to any one of Evans’ roles, set photos, magazine shoots, or promotional tour shots, and it’s all the better for it.

The account’s been posting since Sept. 24, but it only appears to have gone viral in the past day with its follower count rising from a few hundred to tens of thousands in a matter of hours. Both Evans and golden retrievers garner strong reactions on their own, but when you put them together? It’s practically catnip—and we could all use those wholesome photos in our feed.

Besides, we can’t argue with the evidence that Evans might actually be a golden retriever.

Evans has yet to publicly comment on @retrievans, but he is among one of the more than 21,000 people who follow the account, so he’s on board with it enough to add it to his Twitter feed.

And now we’re all patiently awaiting even more proof.