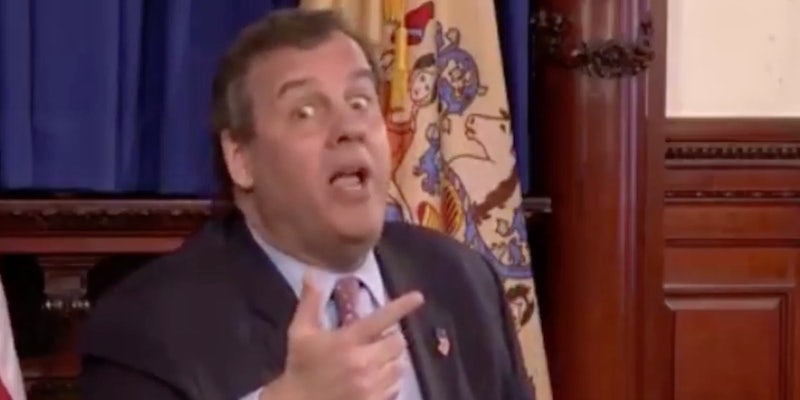 All the times Chris Christie has had fun on the Internet, with people

New Jersey Gov. and newly minted Donald Trump surrogate Chris Christie became the laughingstock of the Internet by looking like a hostage signaling for help during Trump’s Super Tuesday victory speech. The mockery was so creative and widespread that Christie was forced to address it in a press conference Thursday.

“It doesn’t matter to me,” he said. “I’ve had a lot of fun on the Internet with people at times, too.”

Oh really? Time for a quick fact-check. How many verifiable public instances are there of Chris Christie having fun (on the Internet, with people)? Should we describe the amount of fun as “a lot?”

Outsiders, sadly, can only guess at the governor’s state of mind—after all, everyone thought Christie felt ashamed and embarrassed standing behind Trump on Tuesday, but Christie says that is not the case. However, Christie has engaged people online in ways that could reasonably be considered “fun.” Here they are:

The Time He Released, Then Deleted, a Bad Movie Trailer

On a Tuesday in July, two years ago, Christie dropped a fake movie trailer—complete with “movie trailer guy” voiceover—to advertise his plan to cut New Jersey worker benefits. The title? “No Pain, No Gain.”

Christie’s office pulled the trailer, produced in-house, almost immediately after Dwayne “The Rock” Johnson complained about being included in it. And because cutting billions in pension contributions while telling people to suck it up with a jokey movie trailer did not—shockingly!—play well.

It was an elaborate use of state resources for trolling, impeded only The Rock’s swift intervention. The very definition of good old-fashioned Internet fun.

Also in 2014, at the height of the Bridgegate scandal, Christie appeared on Jimmy Fallon’s Tonight Show, the most aggressively made-for-YouTube program in late night. Dressed in rumpled khakis and a polo shirt, the chief executive of New Jersey reenacted one of the first viral videos of the YouTube era, “Evolution of Dance.”

But was “Evolution of Dad Dancing” fun? For Christie, probably not: It ended with him mock-protesting as Fallon did a move called “The ‘This Bridge Is Closed.'”

A necessary and uncomfortable piece of damage control, maybe, though enjoyment, delight, and other hallmarks of what we traditionally understand to be “fun” were sorely lacking.

The Time He Was on Bruce Springsteen E-Mail Lists

Before he was even a district attorney, Chris Christie was a lobbyist by day, Bruce Springsteen listserv persona by night. Politico revealed last year that “Chris C.” spent much of 1999 and 2000 on Luckytown.org, a Springsteen fan mailing list.

Christie, who has seen more than 100 Springsteen shows, did actually post his thoughts now and then. Once, he praised the Boss’s ever-changing setlists, calling for an end to concert signs bearing song requests.

“Let’s kill the signs and enjoy what he is bringing us—a wide variety of music from the greatest rock n roll party band ever,” Christie wrote.

But his longest and most notorious post detailed a chance encounter with Springsteen himself on airplane in late ’99. Presented with a 30-minute delay and a captive audience, Christie struck up a conversation, mentioning that he and his wife “had flown halfway across the country to see him and were heading back home to Jersey.”

To which the Boss, who clearly wished to be left alone, had a slight and almost bitter reply:

And what did his hero say in return for all that devotion?

At the end of the flight, after Chris from Mendham regaled Springsteen with a story about his son’s experience at an earlier concert, Springsteen agreed to sign some autographs for the kids. But still: “Me, too.” Two words. It must have stung a little.

Nearly 15 years later, Springsteen would request that Christie stop playing any of his music at events, then proceed to make fun of the governor’s Bridgegate scandal with Fallon.

Springsteen’s rejection must have been heartbreaking for Christie, but composing that ecstatic email to his fellow fans on a Friday afternoon, just bursting to tell them that he—Chris C. from Mendham!—had had a “brush with Bruce at 30,000 feet?” Well, that was probably fun.

But these incidents only constitute Christie’s publicly available records viz. “fun on the Internet.” Perhaps he has some private highlights to share? Has he Rickrolled anyone? Photoshopped a goat? Amassed a huge teen following on an anonymous Vine account?

We may never know. Christie’s office has yet to respond to the Daily Dot’s request for a substantial list of specific episodes wherein the governor has successfully—and verifiably—indulged in Internet-based frivolity.