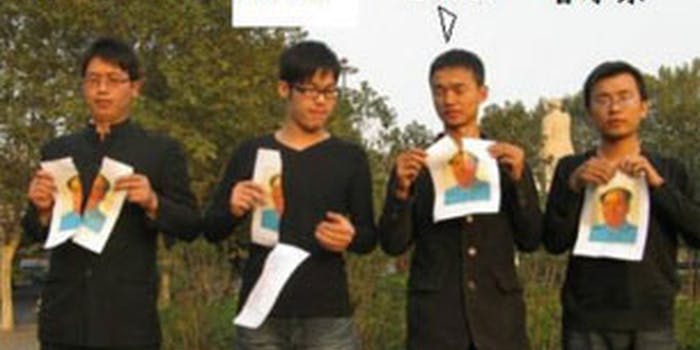 The new planking? Chinese tear up photos of Mao

In what started as a protest against autocracy, Chinese netizens have turned ripping up Mao portraits into a viral sensation.

In America, jumping on the meme bandwagon takes about as much courage as putting on socks in the morning. In China, the stakes are just a tad higher. Especially when the latest meme involves taking pictures of yourself ripping apart images of Mao Zedong.

Case in point: The four young men who started the Mao-ripping meme have already received death threats—not just against themselves, but their entire families.

It all started as a protest against autocracy. The men—Lin Qilei, Ji Laisong, Cao Xiaodong, and Wen Li—had read a story about a Chinese woman in Cambodia who’d been put in prison for tearing up a photograph of that country’s late king. So the four men, who live in Zhengzhou, the provincial capital of the Eastern province of Henan, grabbed some portraits of Mao.

Then they asked their friend to snap a picture as they ripped the images to shreds.

“Leftist” Chinese Mao fans were not pleased, it’s safe to say. That picture quickly spread on places like Sina Weibo, the wildly popular Chinese microblogging service, and it didn’t take long for China’s so-called “human flesh search engine” to pin down their real identities. Their phone numbers were posted. They received threatening comments and phone calls.

Some paranoid netizens even chalked up the photograph as some kind of nefarious plot orchestrated by Chinese dissident artist Ai Weiwei. (“It had nothing to do with Ai Weiwei,” Cao told a Hong Kong news site. “It was just something I thought up, and then everyone went and did it.”)

Well, at least the four Zhengzhou men aren’t alone. While they’re taking heat from Maoists, they have allies online. Chinese netizens have turned ripping up Mao portraits into quite the viral sensation, just in time for the country’s once-in-a-decade leadership transition.

Twitter user @hexiefarm has been compiling the images over the past day. Below, we’ve posted our favorites.