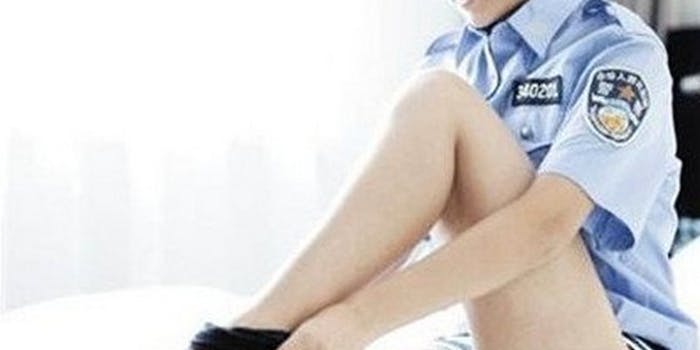 Just a few weeks after jailing a Twitter user for telling a joke, Chinese authorities busted a model for posting pictures online.

Chinese authorities are very busy with state security these days. Just a few weeks after jailing a Twitter user for telling a joke, they’ve busted a model for posting pictures online.

By most standards, the photos Wang Xiaomeng posted to Sina Weibo in July border somewhere between minimally titillating and minimally voyeuristic. They show Wang, 23, wearing a policeman’s uniform and sitting on a bed, pulling up a pair of stockings over her bare legs.

She paired the photos with a pretty mundane fantasy, translated by The Telegraph’s Malcolm Moore:

“As a new cop in my hometown, I need to learn the basics. As one of the flowers of the force, I am under pressure. I have to eat and drink with government leaders every day. I am using my flower status to dine with the leaders and win contracts for projects and investments!”

Her followers liked the pics. They shared them more than 500 times and left more than 300 comments. But you can just imagine some uptight Chinese bureaucrat stumbling on the photos somewhere deep inside Beijing’s police headquarters, forced to shift in his seat and straighten his tie as the sight of bare flesh pops up in his Weibo feed.

Wang was arrested a day later. On Monday, she was sentenced to nine months in prison, which was immediately suspended for a year. Her crime: impersonating a policewoman. (Do China’s cops frequently post half-nude photos of themselves to social media or something?)

“It’s obvious that [Wang] was doing this purely out of fun,” the Huffington Post translated one Weibo user as saying in response to the news. “She had no intention of seeking illegal interests. Regardless of how she damaged the police force’s image, a law was not broken.”

Mostly true. Except the only things damaging the image of the Beijing police are the police themselves.