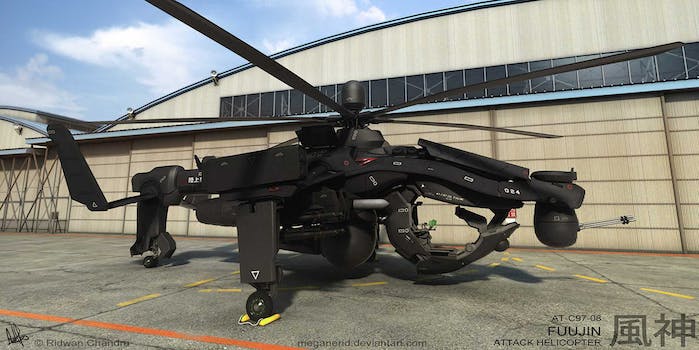 Artist Ridwan Chandra Choa is glad for the extra attention, though.

On Tuesday, word that the Japanese military was developing a high-tech helicopter spread across multiple Chinese media outlets. There was only one problem, though: These reports were not based in fact.

The first to cover this alleged military vehicle was the Global Times, who published a series of images of the concept design on its Huanqiu.com website.

“This appeared online today; it seems to be a concept for a Japanese Self Defense Force armed helicopter made by the Japanese military complex,” they asserted. “One can see that because this type of technology is not yet available, it looks like something out of science fiction.”

That’s because it is something out of science fiction. The creator of the images is Ridwan Chandra Choa, an Indonesian native who previously worked as an asset artist for Lucasfilm Animation Singapore. The Global Times lifted the pictures from Choa’s deviantART page, which not only features the aforementioned aircraft—Choa dubs it the “Fuujin Attack Helicopter”—but multiple futuristic weapons and gear as well.

What’s even worse is that the story was picked up by Xinhua, a Chinese newswire comparable to the Associated Press or Reuters.

For his part, Choa is appreciative of all the attention.

“What with the sudden spike in pageviews! So that’s the reason lol,” he wrote on his deviantART page, making sure to include a link to his commission information.