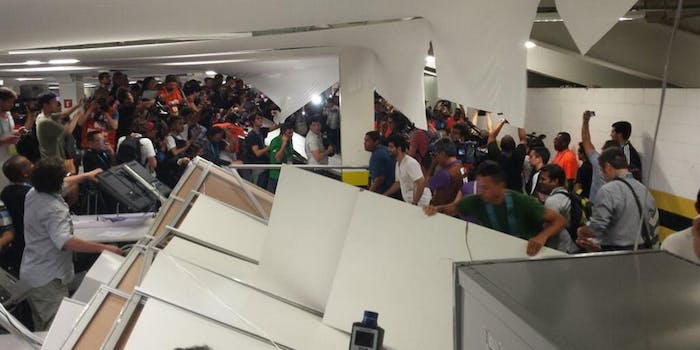 Fans reportedly broke through a barrier fence and into the stadium.

At least 100 Chile fans invaded the media center at Maracanã Stadium in an apparent attempt to sneak onto the field Wednesday ahead of Chile’s vital Group B match with Spain. Fans reportedly broke through a barrier fence and into the stadium.

Mexican journalist León Krauze reported that the fans entered through the press tent.

Arrests were quickly made, and reports estimate roughly 70 fans have been detained.

Journalists covering the match say that they were kicked out of the press area minutes before kickoff.

Many ticketless fans, however, have reportedly made their way into the stands and found seats. Thousands more Chile fans without tickets continue to line the stadium’s adorning roads.

At least one Chilean fan was injured and taken outside in a wheelchair.