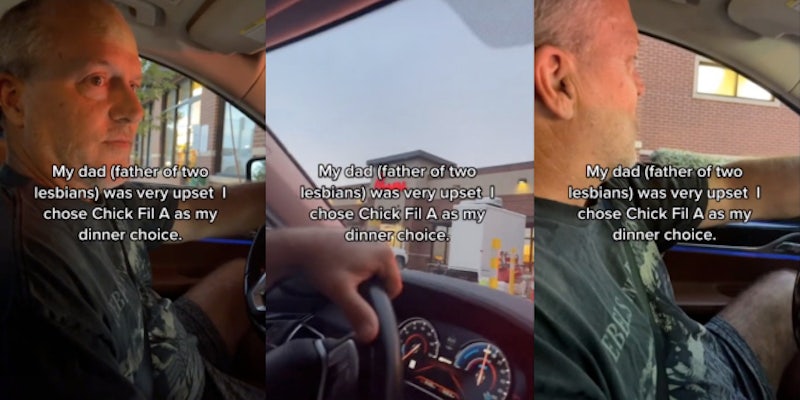 ‘Remember Stonewall’: Southern dad of 2 lesbians upset that he was dragged to Chick-Fil-A

Support from family and friends comes in all shapes and sizes, but for one TikToker, it meant seeing her dad be vocal about supporting his daughters at a Chick-Fil-A when one of them wanted dinner from there.

Chick-Fil-A’s long history of supporting anti-LGBTQ+ groups has been well-documented, with many urging people to boycott the fast food chain because of it. While it’s unclear how much of a dent the boycott made, Chick-Fil-A pledged to stop donating to those groups in 2019. But by 2021, it reversed course by funding the National Christian Charitable Foundation, which funds other groups that have lobbied for or authored anti-transgender legislation and pushed to shut down the Equality Act.

TikToker @h_kennedy_w is aware of Chick-Fil-A’s association with anti-LGBTQ+ groups, but on this particular night, she just really wanted Chick-Fil-A’s Cobb salad. As it turns out, so was her dad, because he brought it up himself.

“My dad (father of two lesbians) was very upset I chose Chick Fil A as my dinner choice,” Hailey wrote as a caption on the video.

“I told Hailey this is not LGBTQ friendly, coming to Chick-Fil-A, but she wanted to come here anyway,” her dad said.

When they drove up to order, Hailey’s dad exclaims, “Remember Stonewall!” before he starts ordering their food. As he does that, Hailey can barely contain her laughter.

And it’s the kind of solidarity that, for many of the millions of people who’ve watched the video since it was uploaded in late July, really caught on. They particularly got a kick out of his mention of the Stonewall Uprising, the series of protests in New York City that kicked off the modern movement in support of LGBTQ+ rights. Others noted how lucky she was to receive that kind of support from her dad.

It’s far from the only video @h_kennedy_w has where she’s documented the level of support she gets from her family. But the video of her dad proclaiming “Remember Stonewall!”: It might not change anything major, but in the end, it’s the thought that counts.