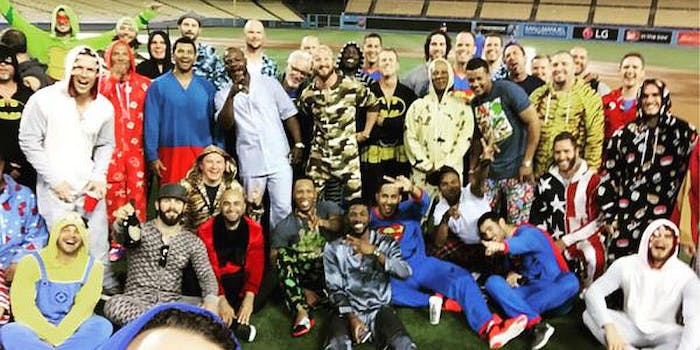 There are a whole bunch of major leaguers in Batman pajamas.

Cubs pitcher Jake Arrieta threw the first no-hitter of his career on Sunday night, and he proved his dominance in the ninth inning when he struck out the side to end the Dodgers’ chances. Afterward, the Chicago players did the most obvious thing possible: They had a pajama party to celebrate.

It looked like plenty of fun was had by all.

Get out of that dirty uniform, hop in the shower, dry off, climb into that onesie, and head over to the post no-hitter press conference.

Then, it’s time to imbibe some celebratory beverages.

No no sorry about that !!!! #wearegood and @JArrieta34 is the best in the game pic.twitter.com/DcgPrMcf0R

(And just because it’s hilarious, here was the outfit selected by Cubs manager Joe Maddon.)

Sadly, though, the impromptu pajama party wasn’t quite what it seemed. Because it wasn’t exactly impromptu. As Yahoo explains, “Maddon has been doing themed road trips with his teams since his days with the Rays, and he’s brought the practice over to Chicago. The Cubs were going to fly home clad in pajamas regardless of Sunday’s result, Arrieta’s first career no-hitter just brought the festivities to another level.”

Yes, it did. And with that, let’s head out to the field for one last team photo before it’s time to board the airplane back home!