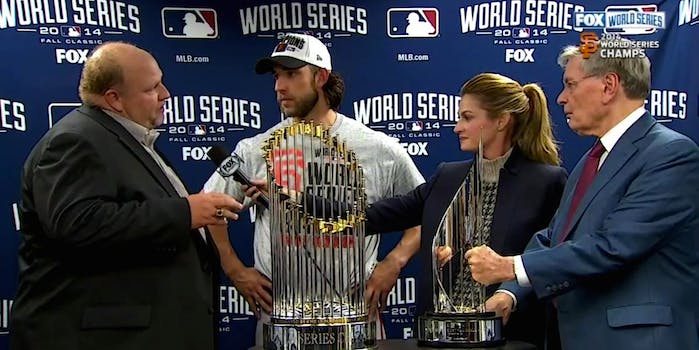 Chevy executive presents Madison Bumgarner with a truck, rambles about ‘technology and stuff’

This may not have been how San Francisco Giants pitcher Madison Bumgarner imagined the moments after his big win.

Winning the World Series for his team after an incredible run? Of course, every player on that field probably imagined himself basking in the glow of victory. But being presented with a brand new car by a bumbling spokesman? Not so much.

But that’s where Bumgarner ended up after his triumph alongside Fox Sports’ Erin Andrews, Commissioner of Baseball Bud Selig, and Chevrolet executive Rikk Wilde. It was a big moment for Wilde as he awarded Bumgarner with a 2015 Chevy Colorado, and his nerves clearly got the best of him as he stumbled through his speech.

The Washington Post counted seven “uhs” and four “ums” in the one-minute clip, and his utterance of “technology and stuff” isn’t likely to be forgotten by Sports Twitter for the foreseeable future.