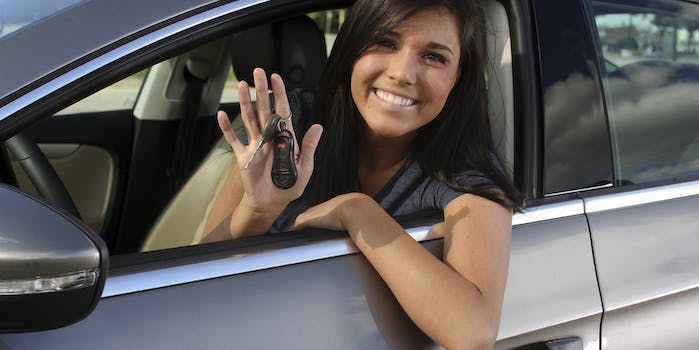 When you let a teen take the wheel, you’re putting a bomb in their hands

Teens are the most dangerous people on the road. Why are we letting them drive?

Chevrolet’s 2016 Malibu comes with a surprise special feature for young drivers—a teen driver mode with parental controls designed to reduce the risk of accidents when an inexperienced driver is behind the wheel. The automaker isn’t the first to develop a big brother for new drivers, and it’s being engineered with the best of intentions. However, technology of this nature isn’t an effective solution to the safety risks posed by young, inexperienced drivers.

Nearly nine percent of drivers in the U.S. are 19 and under. When teens do get behind the wheel, they are among the riskiest drivers on the road—though older adults give them a run for their money. Sixteen and 17-year-old drivers are much more likely to be involved in crashes, with a radical dropoff as people hit 18, and the odds start increasing again as drivers get into the 80s. Nearly 3,000 teens—seven every day—died in car crashes in 2012, and two-thirds of them were boys.

When teens do get behind the wheel, they are among the riskiest drivers on the road.

Sixty percent of those deaths were drivers, starkly illustrating the specific concerns about teens behind the wheel. Among men, drivers between 15 and 24 account for 30 percent of the costs associated with crashes, and female drivers in the same age range account for nearly as much among women.

Notably, teen accident statistics have improved radically since 1975, when they were at their height. Several factors have contributed to this, starting with the graduated licensing system in place in most states since the 1990s. Young drivers are required to drive on a learner’s permit under supervision and clock a certain number of hours before they may apply to take a driving test, and once licensed, they’re subject to strict rules about driving hours and passengers.

Moreover, modern vehicles have much better safety features. These include air bags, crumple zones, and other technological components designed to increase crash survival, but vehicles also sport antilock brakes, anti-slip technology, collision alerts, and more. Driving is much safer than it has been, and the steep decline in deaths and injuries demonstrates this.

However, this doesn’t change the particular safety risk that humans pose, especially teenagers, whose cognitive maturity is lower than that of older drivers. Some pay a steep price for it.

Making teens as well as others on the road safe is an important priority for car manufacturers and state governments, let alone for parents, as well it should be. Chevrolet isn’t the first manufacturer to explore technologies designed to create a “teen mode” for cars. Ford, for example, uses MyKey technology to turn off the radio when teens aren’t wearing seatbelts and to install a governor that limits speed to preset limits. Along the way, the device also blocks selected radio stations—such as those deemed “explicit.”

However, this doesn’t change the particular safety risk that humans pose.

Reporting on the technology for the New York Times in 2009, John R. Quain also pointed to already existing nanny technologies for parents obsessed with their teen drivers. “Web-based services allow anxious parents to track a car’s position and speed,” he wrote, “and even receive cellphone messages should their child leave a designated area.” A huge variety of devices and applications allow parents to keep tabs on their kids, making it much easier to call them out when they speed or when they travel too far from home.

In Chevrolet’s case, the teen mode will also enable safety features like collision alerts automatically, and it won’t allow teens to turn them off. The real kicker for teen drivers comes in the backend, though: It’s not just a proactive system to prevent accidents, but also a spy, reporting back to parents on what their teens are up to.

Surprisingly, young drivers are in favor of such technologies. In a poll of 1,000 people between 18 and 70, researchers at Carnegie Mellon found that 81 percent of young participants supported the adoption of parental modes for cars. Even teens know they’re bad drivers. Jordan Golson at Wired warns, however, that these technologies may come with a dark side:

It’s also possible that the government might step in and try to regulate these features—either to require or restrict them—for better or worse, as one more step towards a safer and more autonomous future. Though we love some of these parental control ideas, we’d definitely prefer if they were optional.

Nanny mode is one option to increase safety for teen drivers and those sharing the road with them, but technology can’t solve all ills. Even with systems to limit speed and keep safety systems on at all times, teens are still more likely to be distracted on the road as they adjust radios, talk on their phones, or text—all of these distractions are a problem for older drivers, too, but inexperienced drivers can get into particular trouble.

Likewise, teens are also at risk from their passengers. As anyone who drove off campus at lunch with friends as a teen knows, things can get boisterous as people revel in their newfound freedom, and that’s when accidents tend to be more likely. The more teens in a vehicle, the higher the accident risk, with drivers often showing off for their passengers rather than focusing on the road.

It’s not just a proactive system to prevent accidents, but also a spy, reporting back to parents on what their teens are up to.

Concerns about passengers are, thus, a key component of the graduated licensing system, which typically includes restrictions on who can ride in a car and when. Teens may not be permitted to drive with other teens, or may be required to have an experienced driver over 21 in the front seat with them.

In Britain, a 2013 report suggested that graduated licensing like that used in the United States wasn’t enough, though. The report recommended raising the driving age to 18 to keep some of the most dangerous drivers off the road, and it also recommended increasing the amount of time spent in training before granting licenses.

The U.K. isn’t the only nation thinking about adjusting the driving age. In the U.S., some states are thinking about whether they want to allow people on the road at 16, and there are some hard statistics to back up their concerns.

One of the most obvious rejoinders to an argument for increasing the driving age is the claim that if people start driving at 18, accident rates for 18-year-olds are likely to rise, as they’ll be the new generation of inexperienced drivers. However, in comparisons between New Jersey and Connecticut, two nearby states with different driving ages, New Jersey prevailed:

The example the institute uses most prominently is New Jersey, the only state with a minimum driver’s license age of 17. The report cited a study from 1992-96 in which the rate of crash-related deaths among 16- and 17-year-olds was 18 per 100,000 in New Jersey, compared with 26 per 100,000 in Connecticut, which had a minimum driver’s license age of 16 and 4 months.

The problem, in other words, is not just one of experience, but also one of age. While it’s difficult to compare the benefits offered by nanny technologies versus increases in the driving age, as there are too many variables to control for, it’s clear that raising the driving age would reduce accidents and deaths. Teens might not be in favor of it—especially in areas with poor public transit where driving is almost required to get around—but it would benefit society as a whole.

For the next generation of teen drivers, self-driving cars might be the solution, ensuring that people of all ages don’t actually control their vehicles, leaving the task of driving up to experienced algorithms. When such vehicles become more readily available, they’re likely to radically change driving culture, attitudes about car ownership, and accident statistics in the United States, but they’re not here yet.

Americans need a solution to the problem of dangerous driving now, especially as the number of licensed drivers is on the rise, and the most direct approach to the problem may be the one teens hate the most: Keeping them out of the driver’s seat.