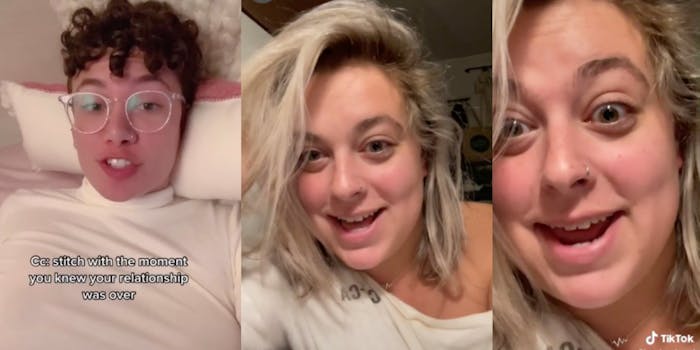 TikToker says boyfriend bought urn, pretended she was dead so that he could cheat

'Men do anything but be faithful.'

TikTokers have been sharing storytimes with the “tell me about a time” trend. The trend has TikTokers posting videos of entertaining or dramatic experiences they’ve had, and telling others to respond with their own, similar stories.

TikToker Megan Boykoff, @megan_boykoff, challenged viewers to tell her about the times they knew their relationships were over. Boykoff started with her own moment and told viewers she knew her relationship was over when she started drafting a text in her notes app.

Viewers related to Boykoff’s video. They commented and stitched with their own stories about failed relationships, ranging from “when I started daydreaming about being with someone that I deserved,” to “at 11:11 I wished he would cheat on me so I would have a ‘good reason’ to break up with him.”

Plenty of viewers stitched Boykoff’s video, sharing stories about falling out of love, some dramatic and some mundane. But one TikToker’s story about her ex-boyfriend’s elaborate plan to cheat on her shocked viewers.

TikToker Brooke Ashley Smith, @brooke_abroad, told viewers her boyfriend pretended she was dead to cheat on her.

“When I questioned him why there was an urn in our living room, and later found out it was so he could cheat on me and tell people that’s the reason there’s still pictures of me up in our house and why there’s womanly decor—because I’m dead,” she revealed.

Viewers were appalled at the lengths this man went to so that he could cheat on his girlfriend.

“Men do anything but be faithful,” one user commented.

“TikTok is an endless ocean of new and innovative ideas,” another said.

“IN YOUR HOUSE??? Did you tell him it was a good thing he bought that urn, because he was going to go in it?” one user questioned.

Smith hasn’t spoken more about the failed relationship that went viral. But she has made a few humorous TikToks about her newfound fame, and viewers are hoping for a more detailed storytime soon.