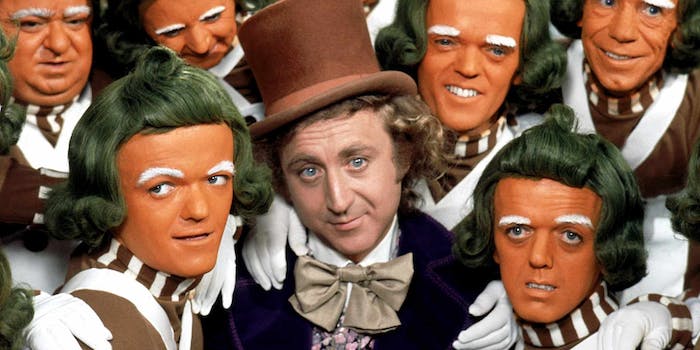 Is the new ‘Charlie and the Chocolate Factory’ cover trolling readers?

This is the best thing that could have ever happened to Roald Dahl.

Penguin Books is either the biggest troll ever, or the most clueless publishing company in existence—and given that they’re one of the “big five” publishers and they’ve been in existence since 1935, I favor the former. With their addition of Charlie and the Chocolate Factory to the Penguin Modern Classics library, they’re not just honoring a truly classic children’s book: They’re also stirring up a hornet’s nest. Penguin’s reworked cover is a far cry from the sweet, folksy rendition created by iconic illustrator Quentin Blake. This version looks like something straight out of Lolita or possibly Valley of the Dolls, and it’s creeping people out all over the Internet.

Penguin’s new cover of Charlie and the Chocolate Factory, is…um…WHY IS JONBENET RAMSEY ON THE COVER?! *runs away* pic.twitter.com/d3qJptoWNF

Here’s what you need to know about the new Charlie: This is the “adult edition” of the book, released with an entirely new cover, internal contents the same. The trend of rebranding children’s and teen books with adult covers is hardly anything new—see the differing marketing and covers for Stephenie Meyer‘s The Host, for example. Penguin, just like other publishers, does it all the time, and the house has become particularly famous for its stunning, provocative, and fascinating cover redesigns, particularly of classic books.

Being included in the Modern Classics is a very big deal and an honor accorded to very few children’s books, reflecting a general attitude in the literary community that children’s fiction is lesser than its adult counterpart. Thus, it’s a huge victory for Roald Dahl’s classic to appear in this listing at all. It’s also not a huge surprise that Penguin commissioned a cover redesign, as this is typical for all the Modern Classics, many of which have edgy, startling covers designed to spark conversations among readers.

To be clear: While this is a childrens’ book, this edition is not being marketed at or for children. It is for adult readers. Notably, Penguin’s childrens’ imprint, Puffin, is celebrating Charlie’s golden anniversary at the same time—in a co-marketing campaign that’s designed to reintroduce the text, draw in new readers, and captivate long-time fans. (I still argue that the lesser-known Danny the Champion of the World is Dahl’s greatest work for children and highly recommend it if you haven’t read it.)

In that context, is the cover creepy? A lot of people think so—and with good reason. In a cover that seems to be showing Veruca Salt on the lap of her overindulgent mother (though Penguin claims otherwise), Charlie and the Chocolate Factory is depicting a rather sexualized, eerie image of a young girl. Fans of the book and those who see it in a childlike, innocent way are deeply disturbed by the cover—but that’s not the only way to interpret the imagery.

In many ways, Charlie and the Chocolate Factory is a deeply subversive book. It’s a criticism of greed, capitalism, and the accumulation of wealth, starting from Charlie Bucket’s miserable living conditions and proceeding to the absurd ostentatiousness of the chocolate factory itself. Characters like Salt are caricatures of spoiled rich children profiting from the labors of oppressed workers—let’s not forget how Violet got her golden ticket. It’s also about strange relationships between children and their parents, a theme Dahl frequently explored in his work (Matilda is another great example).

Is the cover, then, a horrible sexualization of a beloved children’s book, or a chilling reflection of the book’s darker themes? Rounding up responses on BuzzFeed on how the new cover has become an Internet lightning rod, Daniel Dalton likewise noted that a number of responses to the cover touched upon the book’s fundamentally “subversive tone.”

I like the new Dahl cover, not for a children’s edition but think it works for a Penguin Classic. Captures the dark, unsettling nature.

Love the new cover for #CharlieAndTheChocolateFactory by Penguin Modern Classics. Completely creepy, and taps into the darkness of the book.

Interviewed by The Bookseller, children’s illustrator and writer Sarah McIntyre said that: “{Though the] sexualized image rings [warning] bells, that streak of cruelty is quite Dahl… It’s also interesting that the image is not based on the main character, it doesn’t need to be because Charlie…is an established book.

In a write-up for Creative Review, Mark Sinclair further points out, “While the candy-colours hint at the sickly-sweetness of Willy Wonka’s confection, of more significance is the unnerving quality of the image which touches on one of the main undercurrents in the book: the relationship between children and their parents, and what can happen when fame and fortune enter into their lives. (Visually, if it alludes to any of the book’s characters, it’s likely to be Veruca Salt, the spoilt English darling who gets anything she wants. Here, her ‘mother’ has been cropped just out of shot).”

Defending the cover, Penguin representative Helen Conford argued that “people aren’t used to seeing Dahl in that way.” She is absolutely correct; many people think of Dahl as a sweet, innocent writer producing cute children’s books with charming illustrations (the long-term collaboration between Quentin Blake and Dahl has made Blake’s illustrations part of the Dahl “brand”), but in fact, that’s not the case. Dahl’s works for children are quite dark—and his adult books are even more sinister. Penguin not only confronted and explored that theme, they put it right on the cover.

In all the lively discussion over the reworked design, though, one thing is missing: The absolutely brilliant PR coup for Penguin, which must have known that the cover would spark a truly massive Internet controversy. One does not, as they say, change beloved book covers or simply walk into Mordor—such a radical reinterpretation of the Charlie cover was bound to spark offense, outrage, and debate—and that translated into tons of free publicity for the publisher.

One might argue that Penguin didn’t really need it for a classic book that hasn’t been out of print in the entirety of its 50-year existence, but drumming up interest in a new generation of readers is always important. The controversy over the cover spawned hundreds of articles featuring the new edition (ensuring recognition for readers in bookstores), as well as endless discussion about Charlie, other Dahl works, and Dahl’s larger legacy.

If you want to remind people that Dahl’s still relevant, and that his multi-layered work still merits detailed discussion, what better a way than to disseminate his work with a striking look for a new era? As the Internet rushes to criticize, complain about, or defend the cover, they’re also getting into the nuances of Charlie and the Chocolate Factory as well as Dahl’s work in general, and the resulting conversation is absolutely fascinating.

Penguin’s move could result in a Dahl renaissance, which is going to be great for their backlist, and for those who have been die-hard Dahl fans for years.

Photo via Willy Wonka and the Chocolate Factory/YouTube