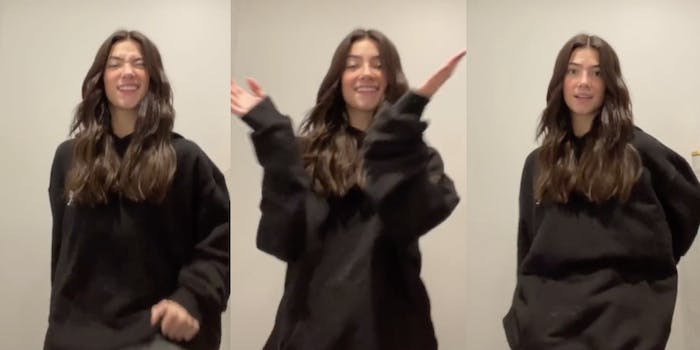 Not everybody thinks D'Amelio's milestone is legit.

Charli D’Amelio, the most popular TikToker in the world, hit another major milestone over the weekend, becoming the first user to reach 100 million followers on the app. But not everybody thinks her achievement is legitimate.

The 16-year-old TikTok star reportedly lost hundreds of thousands of followers last week after a video emerged of her treating her chef rudely at a family dinner. In the video, D’Amelio can be seen joking with YouTuber James Charles about not being able to reach 100 million followers within a year of reaching 1 million. Many TikTokers accused D’Amelio of being “ungrateful” for her success, and after hemorrhaging thousands of followers, it seemed unlikely she would hit the 100 million mark in time.

The controversy didn’t inhibit D’Amelio’s growth for long, and the teen star ultimately eclipsed 100 million followers on Sunday. But other TikTokers believe they have reason to suspect that D’Amelio bought her way to 100 million.

Over the weekend, TikTok user @kissmyasshleyy uploaded a video that seems to expose some of D’Amelio’s followers as dummy accounts. These accounts appear on D’Amelio’s list of followers, but when @kissmyasshleyy visits the accounts individually, she finds that they have posted no content and only follow a few accounts—and D’Amelio isn’t one of them.

@kissmyasshleyy’s video has earned more than 5.4 million views, with many commenters concluding that D’Amelio does, in fact, buy followers. One commenter also argued that if all of D’Amelio’s 100 million followers were real, she would be getting far more than the 3 to 5 million likes she typically earns on each video.

Another TikTok, uploaded by Henry Ouang (@henryouang), shows D’Amelio’s live follower count experiencing “suspicious” spikes “every single minute at the 20-second mark.” The video is no longer available on Ouang’s account (it’s still viewable on Dexerto), and Ouang has since issued a clarification video explaining that he gathered his data from a third-party site called livecounts.io, which does not necessarily prove that D’Amelio is buying followers. Several commenters speculated that a rep for D’Amelio or TikTok had the original video removed and forced Ouang to issue an update.

In the wake of these videos, several TikTokers have directly accused D’Amelio of buying followers on her own posts. Under a recent video that shows D’Amelio strutting through her house with an Amazon box, one user wrote, “That’s the box of followers she bought.” Another chimed in, Oh look it’s [an] Amazon box with followers inside,” while one asked, “When u gonna show us how many followers u bought?”

D’Amelio has not publicly addressed the accusations that she bought followers. United Talent Agency, which represents D’Amelio, did not immediately respond to the Daily Dot’s request for comment.