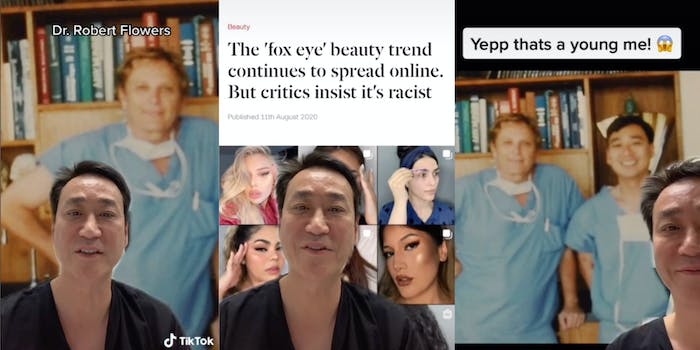 'Y’all gotta stop copying POC features that society has bastardized for generations and claiming it.'

A famous plastic surgeon on TikTok made a video confirming the “fox eye” trend was inspired by Asian features, a claim that has been disputed by those who credit celebs like Bella Hadid for it and try to defend the trend against accusations of racism.

Charles S. Lee, who goes by @drlee90210 on TikTok and is based out of Beverly Hills, first took aim at people who participate in the beauty trend but say they are trying to resemble Hadid, not Asian people.

“Let’s talk about the fox eye beauty trend,” he starts.

Lee posted receipts as well. In his video, Lee included a photo of himself with his former partner, Dr. Robert Flowers, who Lee says invented the type of procedure it takes to achieve the “fox eye” look 50 years ago in Honolulu. “He loved the exotic look he obtained by tilting the eyelids up and lifting the brows,” Lee says, pointing to a side-by-side of a woman who received the procedure, which is apparently formally called corono-canthopexy.

“He was inspired by the aesthetics of the Asian eye in Hawaii,” Lee says.

“How do I know this?” he rhetorically asks, before stating: “He was my partner.”

His video also went viral on Twitter, where it was reposted. “He literally used to work with the man that created the ‘fox eye’ surgery so you guys can’t deny it anymore,” a Twitter user wrote in response to the video.

Another pointed out that white people need to stop “copying POC features that society has bastardized for generations” and then claim those same features as their own when it’s convenient for them.

Lee later clarified in the comments section that he joined Flowers “after he invented the surgery” and that Flowers has since retired.

However, he didn’t respond to a viewer who questioned if he thinks “wanting fox eyes is racist” or if it’s just a harmless trend.

In February, TikTokers began shaving their eyebrows off as one of the methods used to obtain the “fox eye” look without having to undergo pricey, permanent surgery. Asian TikTokers quickly called out the trend for racism and hypocrisy after it went viral. “I remember when I was in primary [school] people were making fun of Asian eyes doing this,” one TikToker wrote at the time. “Now it’s a trend.”

And even though celebrities are believed to undergo procedures to achieve the look, many cited supermodels Kendall Jenner and Hadid as the template for it. Lee appears to simply want to set the record straight on who is the inspiration behind the “fox eye” trend.