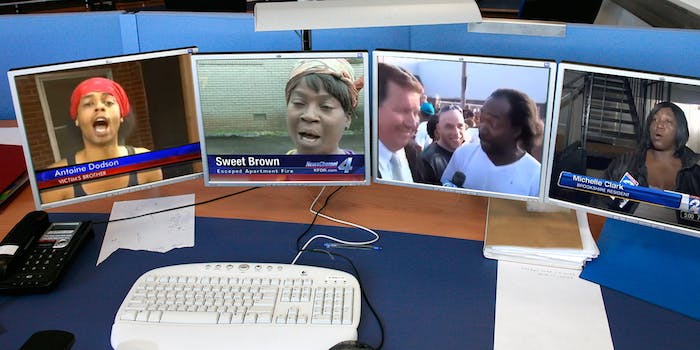 Finding humor in Charles Ramsey doesn’t make you a racist

You giggled when you heard Charles Ramsey talking about his ribs and salsa music. Maybe you’re a racist. But you’re probably just human.

Charles Ramsey didn’t ask to be become Internet famous, or TV famous. He simply responded to distress like any decent human would—and in telling the tale, became an overnight memetic phenom.

He’s not the first. In the last year we’ve been delighted by Sweet Brown and Michelle Clarke, two more minority voices captured by local news media that went on to find viral fame. In years prior we had Antoine Dodson, and in ancient Internet times, Bub Rub.

A narrative thread begins to appear: Millions of people—privileged enough to possess Internet connections and enough free time to goof around online—are all having a laugh at poor, dumb, black people. It’s “problematic” and “troubling.” It’s outright minstrelsy at worst, and unconscious racism at best, that drives the memefication of unwitting minorities.

I’d like to suggest an alternative explanation: We like these stories, and the way they are told, because we crave unfiltered humanness.

We also have plenty of memes built around silly white people. We have Kai, Corey, Kristen Bell crying about sloths, and Jennifer Lawrence’s universally adored red carpet gaffes, which we desperately hope are genuine and not the result of calculated media training that has begun to recognize the generational yearn for authenticity among our celebs. We love Honey Boo Boo because she says the darnedest things—not because she’s poor, or because she has an underdeveloped intellect, but because she operates outside the stifling self-censorship that afflicts most media-addled humans. She’s not trying to perform; she’s simply in possession of an enviable and infectious comfort in her own skin.

Look at Candle Kid. Have you ever seen someone who gave less of a crap about what people think? Same with most old people, who have long stopped trying to impress anyone. The common thread among these memes is not exploitative stereotype fulfillment, but the perceived authenticity that these internet celebrities have attained by not trying to be anything they’re not. They’re “doing me” in a way that most of us wish we could but feel like we can’t.

In an age of selfies, lifecasting, and by extension, omnipresent camera-readiness, there’s nothing we find more relatable and refreshing than someone who tells it like it is. Someone who’s just being themselves, unaffected and unique, without the crushing self-awareness that most of us carry around because we’re so afraid of what people might think of us if we weren’t just trying to blend in.

I spotted a guy on the subway last night, getting freaky on the dancefloor of his mind.

Everyone on the train had a big dumb smile on their face during a cramped rush hour. He’s black. I’m white. Who cares? Everyone thinks he’s the shit and we long to be more like him.

You giggled when you heard Charles Ramsey talking about his ribs and salsa music. Maybe you’re a racist. But you’re probably just human.

Cole Stryker is the author of Hacking the Future and Epic Win for Anonymous.