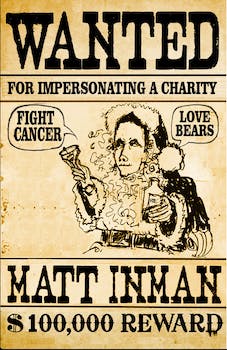 The attorney wants a restraining order between The Oatmeal's Matt Inman and crowdfunding site Indiegogo, which would hold up the transfer of over $200,000 to charity.

A new plotline has emerged in the roller coaster case that is Internet right attorney Charles Carreon v. The Oatmeal proprietor Matthew Inman.

Carreon, who first entered into his squabble with Inman when he filed a lawsuit demanding the beloved cartoonist pay $20,000 to the website FunnyJunk for alleged attribution violations and character defamation, recently announced that he plans to seek a temporary restraining order between Inman and crowdfunding site Indiegogo.

If enacted, the restraining order would severely delay the transfer of funds obtained through Inman’s charity-focused fundraiser, which closed funding on Friday after having raised over $220,000 for the National Wildlife Federation and American Cancer Society.

“If Indiegogo pays Inman the money in the Charitable Fund, and Inman personally donates the money to NWF and ACS, he will be unjustly enriched by receiving a large tax write-off that should properly be allocated pro-rata to the 14,406 small donors who contributed to the Charitable Fund,” Carreon wrote in an email to Ars Technica’s Cyrus Farivar.

“Pilfering very small amounts of money from very large numbers of people is a stock mechanism for conducting computer and Internet fraud. Preventing Inman from exploiting the giving public in such a fashion is in the public interest.”

That public hasn’t had much to say about Inman’s purported exploitation plans—though considering the fact that he was able to raise more than 11 times as much as he’d originally set out to raise, it’s safe to assume that donors do not have many concerns about the Oatmeal proprietor’s motives—but Carreon has found himself in the unlikely role of both financial supporter and legal opponent to the effort.

As reported by the Daily Dot June 16, the Arizona-based attorney is a financial backer of the campaign. His recent restraining order amendment to the lawsuit indicates that he chipped in to the tune of $10 so that he could have a voice in that backing public.

Inman hasn’t spoken publicly about the restraining order but wrote last week that he “still plan[s] on withdrawing $211k [the campaign’s earnings after Indiegogo takes its share] in cash and taking a photo to send to Charles Carreon and FunnyJunk, along with the drawing of Funnyjunk’s mother.”

Inman also wrote that he had wanted to donate the funds to four charities rather than two “because the amount raised was so much larger than expected” but that Carreon’s lawsuit has prevented him from doing so.

“To avoid further litigation with him, I decided to split the money between the original two charities,” he wrote. “If Carreon wanted a minor victory, he got one here.”