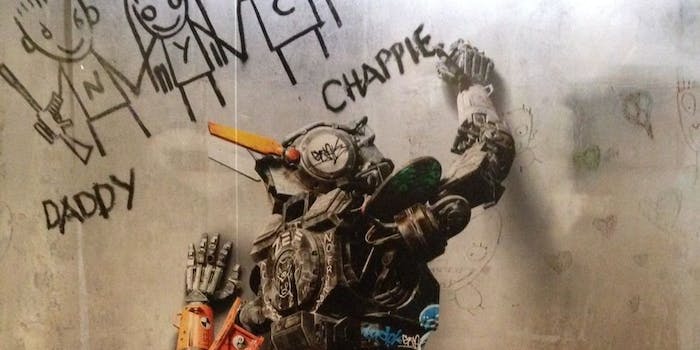 What the movies teach us about robots

With the trailer for Chappie hitting the Web, the film enters cinema's long conversation about man's relationship with machines.

From the eerie Maria of Fritz Lang’s Metropolis, to the adorable Pixar duo of WALL-E and EVE, robots have always captured our attention at the movies, and with the way things are going, chances are they always will.

This week, the trailer for Chappie, the latest from Neill Blomkamp (director of such science fiction hits as District 9 and Elysium) was released, and if the first look is any indication, the film looks to be staking its place in the pantheon of great robot movies. The film’s story revolves around the titular character, who happens to be the first robot in the world to become self-aware, and those who would try to take that away from him (Chappie is a male robot, apparently).

Chappie is asking some big questions, though it’s hardly the first robot movie to do so. Whether it can provide any new insight into our continuing fascination with robots remains to be seen, but what is undeniably interesting is that Chappie is coming along at a time when real world robotics may be at a turning point. In anticipation of the film, and of our very future, it’s not a bad idea to take a look back, and see if we’ve learned any valuable lessons about robots throughout the history of cinema.

Without a doubt, pop culture has, at least partially, influenced the trajectory of actual technology. Look at the way Star Trek predicted the iPad, for instance. But for as much as cinema has speculated about the future of all technology, and robots specifically, reality also continues to fall behind. 2001 has already come and gone without trippy space odysseys, much less regular visits to the moon and murderous computers.

And not only do movies frequently get depictions of the future wrong, but cinematic robots from the silent and golden eras of Hollywood can’t help but look a bit cheesy today. That’s not to say that the movies themselves are bad, but sadly, not every effect ages well. Like a lot of great sci-fi, what the best of these movies work as are either allegories for the time they came out in, or predictions not so much of technological advances, but of social and political ideas that we’re still grappling with today.

One of the best in this regard is 1951’s The Day the Earth Stood Still, featuring the classic movie robot Gort. As the Washington Post’s Matt Slovick argued, “The movie’s pacifist message is just as relevant more than 45 years later.” Slovick wrote, “The film, based on Harry Bates’s short story ‘Farewell to the Master,’ was made during the Cold War and only a few years after mankind witnessed the atomic bomb’s devastation.” (Pro tip: if you’re looking for another great robot movie about the cold war which also applies to the political landscape of today, check out Brad Bird’s The Iron Giant.)

Going into the ‘70s, ‘80s, and many of the early digital effects of the ‘90s, movie robots started to look a little bit better, but by today’s standards, they were still fairly underwhelming. Granted, there’s a definite beauty to practical effects, especially in a marketplace flooded with CGI. But it’s almost alarming to think about how much the look of movie robots has evolved in less than a century. Many offerings that would have been thought of as cutting edge when they were first released now seem woefully outdated. Considering how far we’ve come in the last few decades, effects technology begins to look as if it’s progressing at a frightening rate.

Speaking of frightening, let’s go back to the whole “murderous computers” thing for a second. Dangerous or not, perhaps what makes a film like Chappie, and its focus on sentient machines both so fascinating and so terrifying is that we still have no idea what’s going to happen when we reach that point.

A film like the original Robocop works best as a satire of Reagan-era America, making it more about the time it was released than the future it appeared to be foreboding. However, the questions it raises about man’s potential to merge with machine is at least part of why it continues to resonate today.

“To the best of my knowledge, there is no current research on melding man and circuitry to create cyborg cops,” claimed the BBC’s Quentin Cooper. “And no one even has plans to put armed robots on the beat, primed to laser anyone caught littering. What is advancing at a breathtaking pace, though, is the increasing use of automation and autonomy in policing and surveillance. Less Robocop, more Robosnoop.”

So according to Cooper, the most troubling implications in Robocop have more to do with its vision of a weaponized police state, wherein robotic killing machines are used to police its citizens, and less to do with questions of how one retains their personhood once technology has literally taken over their body. And Cooper’s point is solid, taking into account where we seem to be heading with drones lately. However, it’s still possible that we’ll see functioning robocops yet, as the field of wearable tech continues to expand. And with plans for wrist drones on the way, we shouldn’t count cyborgs and autonomous weapons as mutually exclusive just yet.

Cyborgs can also be an uncomfortable topic, because they’re that much closer to actually being human—or, alternately, they’re so close, but so far at the same time. There probably isn’t a better film on this subject than 1982’s Blade Runner, which finds Harrison Ford’s main character, Rick Deckard, literally chasing down fugitive “replicants,” who blend in so well with humans that depending on which cut you see, the ending may suggest that Deckard is a replicant himself. Blade Runner also brings up questions about uncanny valley, the theory that proposes robots or CGI creations which look too human will automatically come off as disturbing.

If these possibilities all sound rather grim, then equally if not more so are visions of the future that portray robots as our oppressors. Ben Branstetter of the Daily Dot, for one, believes the first truly modern version of this in cinema can be traced back to James Cameron.

“Before The Matrix, The Terminator was possibly the most realized vision of machines turning on their creators in the popular psyche,” he wrote. Benstetter noted that The Terminator retains its power today because “the war between man and machine that comprises the base of the Terminator series is not near to our present, nor is it a certainty.” He continued, “But popular fiction like The Terminator arms us with the ability to grasp the reality of superintelligent AI and how best citizens, scientists, and policymakers can approach the problem.”

This speculation is falling on the alarmist side, however. We should also ask what can we learn from onscreen robots that are not malevolent. What about the the young robot boy David, from Steven Spielberg’s A.I., who only wishes to be loved? Or Samantha, the operating system from Spike Jonze’s Her, who seeks to love and to learn and to grow as a person would? As she doesn’t have a body (a major concern for Samantha on her journey to selfhood), Samantha isn’t strictly a robot, but she does in many ways represent the best of what a robotic future could look like. She’s kind, compassionate, and though she understands she has superior intelligence, she doesn’t use this for anything remotely vindictive.

That said, Samantha’s boundless intellect does portend a definite divide between robots and their human counterparts. What Her is getting at in this capacity is the idea of a technological “singularity.” Popularized by futurist Ray Kurzweil, the singularity theory predicts a time in the near future where the rate of growth in technology will become so rapid that machines infinitely surpass all human intelligence, making A.I. the dominant force on the planet. This would effectively mean the end of the human race, or the end of the human race as we know it, since humans would essentially merge with machines to become a kind of new being entirely.

What makes this additionally scary where movies are concerned is the aforementioned developments in special effects over the last decade or so. Not only have we seen various movies come out about the unstoppable progression of technology, we’ve practically seen that progression enfold onscreen, with the way CGI has become more prominent in filmmaking, surpassing the importance of actual people in some cases.

Science fiction exists not to try and predict for certain what will be—but rather to speculate about what might be. That’s why some visions of the “future” look oddly prescient, and others look woefully inaccurate. As much as we think of the CGI-heavy film world of today as being the pinnacle of digital effects and “realistic” looking technology, no one can say for sure whether the robots of modern cinema will even remotely resemble the actual robots of tomorrow.

One thing’s for sure: We’re still a long way off from a full on, robot-driven dystopia. “While we can theoretically train computers to behave in any way we’d like them to, we cannot train them to be aware of anything (an aspect of consciousness metaphysicists call ‘qualia‘), meaning we certainly can’t program judgement,” concluded Branstetter. “We can’t yet code morality into a drone because we don’t really understand what morality is in the language of our own brains. Until we understand how we make decisions—which is by no means a perfect art as it is—we’ll never be able to create a machine to do it for us.”

The best thing to keep in mind when looking towards the future of robotics is that, as with the future of anything, it’s likely to be ambiguous; full of shades of grey, rather than painted all in black in white. Again, Chappie is not out yet, so we can’t know at this point whether it intends more to alarm or to enlighten. Maybe, the key for all great robot movies is to do a little of both.