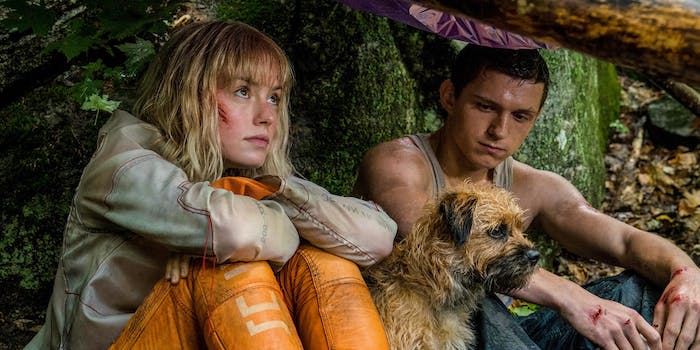 Are we finally going to see this ‘unreleasable’ movie starring Tom Holland and Daisy Ridley?

'Chaos Walking' faced serious issues behind the scenes—but the trailer is finally here.

Much like the erstwhile X-Men spinoff New Mutants, the sci-fi blockbuster Chaos Walking has been through the ringer. Despite starring two of the most bankable young actors on the planet (Daisy Ridley and Tom Holland), the film was deemed “unreleasable” in its original form, prompting extensive reshoots. Principal photography wrapped in November 2017, followed by reshoots in 2019, and now it’s finally scheduled for release in 2021. Oh, Lionsgate just released the first trailer, so we actually know what this movie looks like! The answer? Pretty great!

Chaos Walking was adapted from The Knife of Never Letting Go, the first volume in a critically-acclaimed YA trilogy by Patrick Ness. The books take place on a planet populated by human colonists and native aliens, and the main character is a boy named Todd. A mysterious pathogen killed all the women on the planet, and Todd’s life is changed forever when he meets Viola, the first girl he’s ever seen. (Both characters are kids in the books, but the movie aged them up to be young adults.) The planet also has one other bizarre effect on its human colonists: Every man can “see” each other’s thoughts. It’s a tricky concept for a screen adaptation, and it didn’t help that director Doug Liman has a history of troublesome film shoots.

Liman is best known for directing The Bourne Identity and Edge of Tomorrow—both of which turned out great, but suffered serious issues behind the scenes. Liman had major creative conflicts with Universal while filming Bourne, resulting in reshoots and rewrites. He didn’t return for the sequels. Meanwhile, Edge of Tomorrow started filming before the end of the story had been finalized. While filming Jumper (another YA sci-fi adaptation), a set dresser was killed in a “fluke accident” on set and another employee was seriously injured, along with actor Hayden Christensen being injured several times while filming. Christensen described himself as “battered,” saying that Liman insisted on him doing his own stunts. Despite these issues, Liman was recently tapped to make the first-ever movie filmed in outer space, a Tom Cruise project.

It’s not clear what was wrong with the original cut of Chaos Walking, but the reshoots cost an estimated $15 million on top of its original $100 million budget. Director Fede Alvarez (Evil Dead) reportedly “helped out” with the reshoots, and elements of the screenplay were rewritten by new writers. The cast and crew have been very close-mouthed about what went on behind the scenes, so this trailer is the first real look we’ve had of Chaos Walking.

Considering the problems behind the scenes, this trailer looks better than we dared hope. Predictably for a Hollywood blockbuster, it’s a lot more action-packed than the novel, which is more of a psychological thriller. But the whole “seeing people’s thoughts” thing is pretty hard to execute onscreen. Daisy Ridley, Tom Holland and Mads Mikkelsen (playing the villain, obviously) are three strong choices to anchor a movie like this, and the costuming choices feel distinctive while harking back to YA hits like The Hunger Games. Here’s hoping those reshoots transformed Chaos Walking into a genuinely good film!