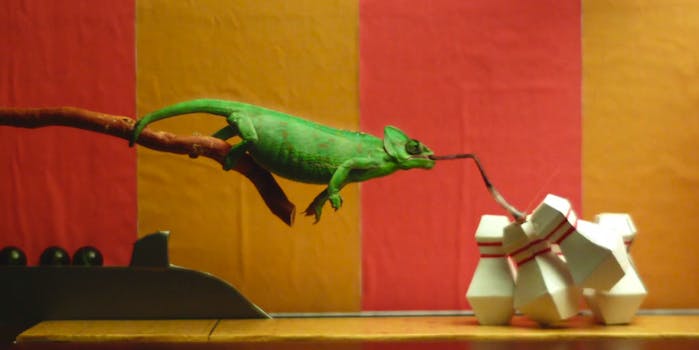 This lizard just bowled a turkey.

The wild world of animal sports seems to be getting more absurd by the day. What began with an event as mainstream as the Puppy Bowl has since splintered into competitions as niche as goat parkour, owl breaststroke, and the puppy long jump.

Then, just when you think you’ve seen it all, along comes chameleon bowling. Though this athletic pursuit might seem strange at first, the unlikely pairing of a hard-to-spot species with a sport that was popular for a month after the release of The Big Lebowski is oddly mesmerizing.

When magical color-changing lizards knock down origami bowling pins with their super-sticky tongues, everyone wins.Photo via HelloDenizen/YouTube