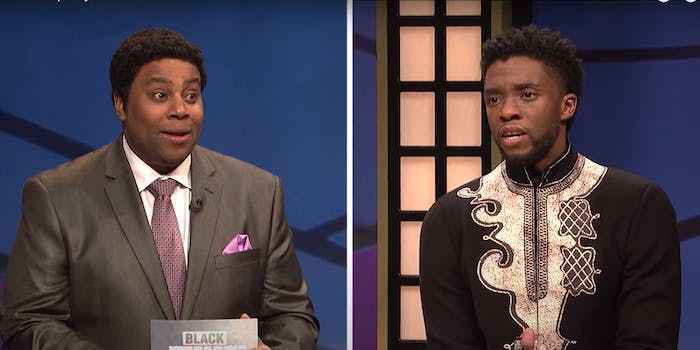 In an old Saturday Night Live skit, Chadwick Boseman, playing the role of King T’Challa, gracefully dunked on Karens (and their food) during a game of Jeopardy, and people are soaking up the lighthearted memory.

The viral clip has been reposted all over Twitter and Reddit, amassing more than 10 million views since his passing. The video comes from a 2018 SNL “Black Jeopardy” skit. Boseman shared the stage with Leslie Jones, Kenan Thompson, and Chris Redd.

“Chadwick Boseman’s SNL sketch about Karen and her potato salad was freaking legendary. Dammit,” Andy Isaac tweeted, along with the posting of the video.

In the video, T’Challa played “white people” for $400. Thompson, who played the host, looks visibly surprised by T’Challa picking such a high amount. Up until that point, T’Challa had been getting everything comically wrong.

“Your friend Karen brings her potato salad to your cookout,” the board reads.

Before answering, T’Challa confirms a few things with the host: Karen is white, and she has her own recipe.

“It is noble that she would volunteer to cook for everyone. And although I have never had potato salad, I sense that this white woman does not season her food. And if she does, it is only with a tiny bit of salt and no paprika, and she will probably add something unnecessary like raisins,” T’Challa said.

And then he gave the winning answer:

“Something tells me that I should say, ‘Aw, hell no, Karen. Keep your bland ass potato salad to yourself.'”

A number of people have said watching the clip has been a welcome relief among the grief of losing a public figure known for his kindness.

You can watch the entire sketch here: