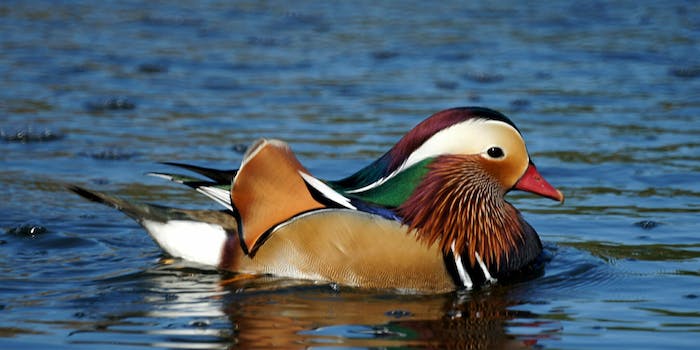 This website tracks the whereabouts of Central Park’s hot duck

Witness the beauty for yourself.

After it was first sighted back in October, the Central Park Mandarin duck took the internet by storm with its sheer beauty. But while the internet moved on, New Yorkers apparently did not. People still pilgrimage to catch a glimpse of the “hot duck,” and now there’s a website to make sure you never miss a sighting.

Reporter Dave Gershgorn started the project after he and his girlfriend traveled to Central Park to feast their eyes on the glorious bird. But when they checked the Twitter, they realized there hadn’t been a sighting reported all day. Just as mysterious as how the duck traveled to the Big Apple from its native home in eastern Asia, no one knows its whereabouts for weeks at a time.

To keep other devotees from experiencing the same disappointment, Gershgorn created hotduck.today. As far as websites go, it’s ‘90s-era basic: It simply provides a “yes” or a “no” to whether or not the hot duck has been spotted each day. The site simply scans the Manhattan Bird Alert Twitter account, recognizes if there are any pictures of the Mandarin duck in reported bird sightings, and records that information.

If you barely paid attention to the internet’s hot duck mania in the first place, this news probably doesn’t mean anything to you. But, if you’re one of those zealots planning a trip to hunt down the gorgeous fowl, Gershgorn’s website could be the difference being #blessed or being stuck seeing … blegh … mallards.