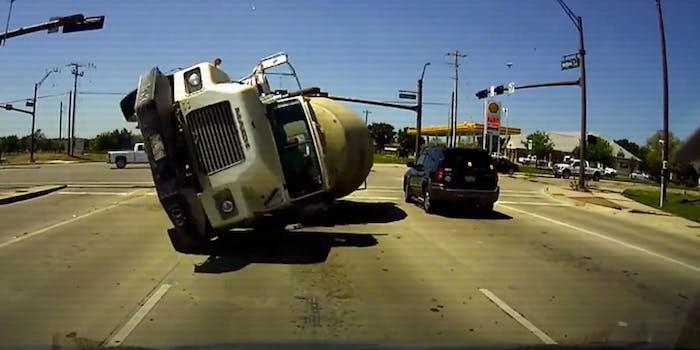 See the horrifying moment a cement truck crashes into a minivan

It's miraculous that nobody was seriously hurt.

We’ve seen plenty of outrageous dash cam videos on the Internet, but this one just might beat them all.

Texas A&M Veterinary Professor Dr. Guan Zhu installed a dash camera in his car about a year ago so that he could use the footage as evidence if he was ever in a car crash. What he probably didn’t expect was to be on the receiving end of an accident involving a giant cement truck.

Zhu had trouble remembering what happened until he watched the footage.

“I just thought, ‘That’s really what happened,’” he said. “‘I could not remember.’ In my memory, a truck is coming… kind of turning 45 degrees and before it hits my vehicle.”

Zhu and the truck driver both made it out of the accident alive or without any serious injuries.