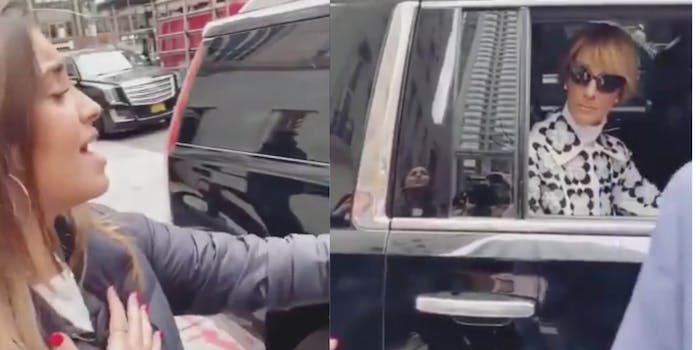 A video of a woman singing 'I Surrender' to Dion is going viral because of the Dion's reaction.

Celine Dion, acclaimed singer and fashion icon, can now add “internet meme” to her resume. A video of a woman singing “I Surrender” to Dion is going viral because of Dion’s reaction.

The video shows Dion in the backseat of her car, sunglasses on, and with a straight-face, while a woman serenades her from the sidewalk.

While Dion seems unimpressed in the first clip, a longer video shows Dion actually told her driver to stop the car so she could listen to the woman sing. After the impromptu performance, Dion gives the woman a fist bump and says, “Thank you for that.”

“She is the perfect meme to use to describe your feelings,” one user tweeted.

Viewers couldn’t get over how relatable Dion’s expression was when judging the woman’s singing.

“‘Judging you in French,'” one user joked.

Though people are roasting this woman for singing to one of the greatest vocalists of our time, many applauded her for having the courage to shoot her shot.