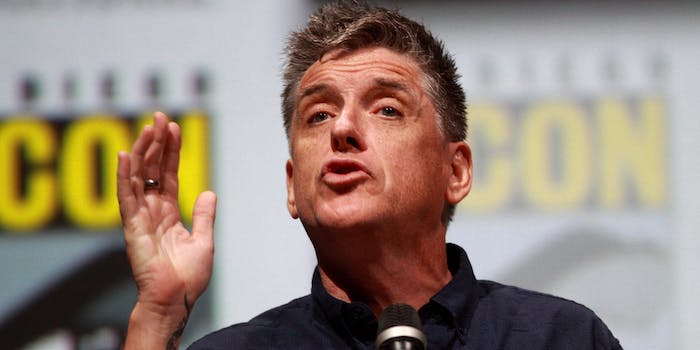 Fans of The Late Late Show were in a tizzy this week as CBS finally prepared to name Craig Ferguson’s replacement—the brave, intrepid soul who will be replacing him when he departs (allegedly voluntarily) in 2015. Late-night comedy is a staple for those of us who are constantly up ‘til all hours courtesy of insomnia, and we count on it for our evening injection of humor and, truth be told, a reason to live. Before we had Twitter to help us survive the late-night hours, we had television, and that means we have a certain affection for the icons of late night. For the rest of us, there’s the occasional next day viral video from Jimmy Fallon to give a taste of what we missed.

But who would it be? Rumors swirled that perhaps CBS was finally willing to put a woman at the helm, exciting news indeed given that this is an absolutely incredible era for female comedians. From Comedy Central‘s Broad City to USA’s Playing House, women are all over the airwaves being painfully funny; they’re producing their own films, they’re rocking the standup scene, and they’re taking their acts on tour. While the female comedy scene is dominated, as is the male one, by straight white women, there are tons of queer women and women of color as well—we’re living in a rich, diverse time for women in comedy.

CBS is known for being a conservative network, so no one wanted to get too wild with the speculation, but perhaps they could replace a white guy with a white lady, in a daring act of progressivism. If they really mustered up their gumption, maybe they could choose a black woman, eh? Thus, we waited with bated breath for the grand announcement, while the Internet swirled with commentary—an illustration of how digital forces are influencing television networks.

Or are they? Because the grand reveal was that James Corden would be the replacement. Oh, look, another white guy comedian. He’s British, though, so I guess that gets him an extra diversity credit, right? Corden, an actor on Gavin & Stacey and Doctor Who, isn’t very well-known in the United States, although he’s appeared on a variety of U.K. shows. He has no late-night hosting credits in his repertoire, although he has hosted a couple of low-level awards shows in the U.K. His resume certainly isn’t as impressive as that of many of the women who could have replaced him—or even Chelsea Handler, who went to Netflix instead.

In fact, one might argue that his qualifications actually doesn’t speak that well of him. On Horne & Corden, his attempt at co-hosting a sketch show, ratings dipped fast after initial interest, which raises some questions about his writing chops and acting abilities. Corden actually admitted that his sketch writing skills were weak, which does not exactly inspire confidence among those who’d like to see a strong comedic presence on late night. Sketches are key to a successful late night show, and someone who can’t engage with that kind of humor is going to get into trouble fast.

The main thing going in his favor is his presence on Twitter, as he has approximately four million Twitter followers. CBS, notoriously laggy when it comes to digital culture, may have thought that hiring him would be a sharp, progressive move for getting ahead of the curve and drawing in a socially engaged audience. (Late night TV tends to perform better in older, middle-aged white dude audiences, while digital culture could appeal to a younger generation.)

But there are lots of women with great online presence who have both appeared on and hosted late night shows, ones who have strong name and brand recognition in the U.S. Amy Poehler and Tina Fey, for example, are big names in comedy and would be fantastic on a late-night show. They have the experience, the fans, and the skills. (But notably, they don’t have Twitter presences, perhaps because they are all-too-aware of the risks of being a female comedian in public and aren’t interested in being barraged in misogyny.) Being able to woo them away from networks that have supported them in the early years of their careers would also be a major victory for CBS, which could simultaneously get great talent and break out of its dull rut.

It’s not surprising that CBS has gone more conservative in the last year or so, as every time the network dares to dip its toes in experimental waters, it immediately yanks them back. But it lost a prime opportunity here to impress audiences and recruit new fans. The most obvious choice for a replacement, after all, would have been Aisha Tyler, who’s already part of the CBS family (as a co-host on The Talk) and due for a promotion. She’s smart, funny, skilled, and overly qualified. Tyler was also a former host of E!’s Talk Soup, a qualification that got Joel McHale considered for the job. One needn’t ask what the difference is.

As a regular on FX’s Archer, Tyler is also a fantastic character actress, which some might argue isn’t an asset for a late-night host—but in fact, it only works in her favor. All late-night hosts are operating with carefully constructed persons, and Aisha Tyler would be no exception. Tyler’s skills at pulling together strong, believable characters and using her voice and talent to her advantage could make her a formidable follow-up for Stephen Colbert, the other late-night host the Internet is buzzing about.

Anyone teamed with Colbert to target a youth demographic needs to be prepared to totally rethink and repurpose the very concept of the late-night show. Colbert made his brand on courting a young, hip audience, and he’ll be taking a large number of youth with him as he shifts to late-night hosting, proving that it’s possible to crack that demographic wide open. Colbert knows how to exploit social media, he knows his memes, and he demands the best of his team, which will make him a powerhouse on the talk show stage. If the comedian in the slot after him can’t keep up, those viewers will vanish like deer on the first day of hunting season.

Yet another white dude doesn’t have much to offer as a partner for Colbert, especially among younger viewers. Colbert is sharp, funny, and incisive. Following him up with a woman like Tyler would be a fantastic programming decision, harnessing the best of their skills and followings to keep ratings high for the often ailing network.

Colbert and Tyler could be a powerhouse duo, pulling in big ratings for CBS. Following Colbert with a comedian who isn’t well-established in the U.S. and who doesn’t seem to have the skills to keep up seems like a great way to get ratings bleed and not much else.

Did CBS just majorly blow it by going for what it thought was the safer choice?