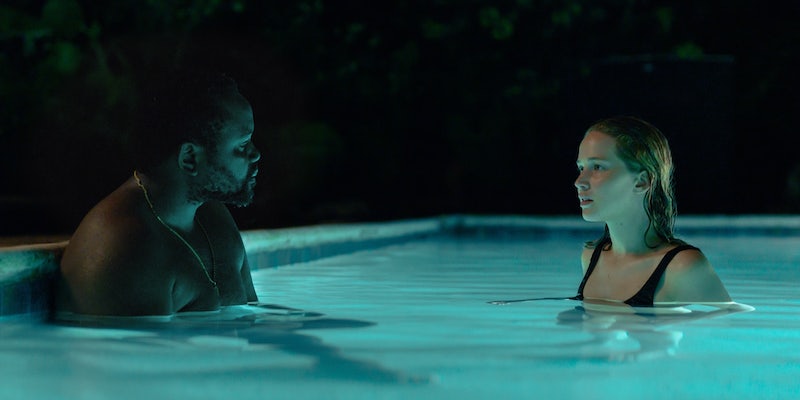 ‘Causeway’ is Jennifer Lawrence’s most interesting role in years

Sometimes there’s nothing more satisfying than leaving two acting greats to their own devices and watching the magic form before our eyes. In that regard, Causeway, the feature directorial debut from theater directing veteran Lila Neugebauer, more than delivers. Much of the film is centered around the conversations between Lynsey (Jennifer Lawrence) and James (Brian Tyree Henry), two people who come across each other by chance and slowly open up about their respective traumas. But while the script sometimes struggles to work past some of the more rote themes, Causeway is an engrossing and intimate two-hander that places Lawrence in her most interesting role in years and gives Henry—who’s already great in projects like Atlanta and If Beale Street Could Talk—a hell of a showcase.

Release Date: Nov. 4, 2022
Director: Lila Neugebauer
Streaming: Apple TV+
An injured military engineer returns to New Orleans from Afghanistan and forms a friendship with a mechanic. Although the script has some issues, it’s a compelling and intimate two-hander thanks to solid performances from Jennifer Lawrence and Brian Tyree Henry.

The incident that led to Lynsey being sent back to the U.S. from Afghanistan (an I.E.D. explosion that led to a brain injury that affected her motor skills) is never shown; we only learn about the specifics when Lynsey’s neurologist (Stephen McKinley Henderson) asks her to explain what happened in her own words even though he has what happened in his files. But the specifics are hardly the point.

By the time Lynsey relays that tale, we’ve seen what she’s had to go through to get to the stage of recovery. There is the stint of physical and occupational theory and a caretaker (Jayne Houdyshell) who patiently helps her relearn everyday tasks and gives her tools to aid her. A trip back home to her mother’s (Linda Emond) home in New Orleans, a place Lynsey hoped never to return. She’s desperate to reenlist and becomes visibly frustrated when her doctor won’t clear her as she thinks she feels OK; she also tries to get the OK to stop taking her meds to no avail.

But her struggles come through in other ways. She picks up a job cleaning pools to get out of her mother’s house and struggles with some of the physical labor that comes with it; she declines her mother’s offer of an office job, a move that seems to be as much to avoid spending more time with her than she needs as it is the need to avoid constant screen usage. She suffers from occasional panic attacks, a hint toward the larger mental struggle she has that emerged as a result of her injury (as well as those she keeps hidden beneath the surface).

Lynsey meets James as a result of a chance encounter: The truck she’s driving breaks down and he works at the auto shop she takes her car to. She doesn’t have a car to use while the truck is being repaired, so he offers to drive her back home, and it doesn’t take long for them to start hanging out more often.

Their conversations start on a superficial level but turn into something more profound as Lynsey and James become comfortable enough to share the respective pasts that continue to haunt them. Even then, they don’t bare their entire hearts to each other as Neugebauer allows each moment to linger. And when the proverbial casket finally blows over as it’s all but guaranteed to, you really feel it.

At times, it veers into overly familiar territory, leaving you to wonder if James is merely serving as the catalyst to help Lynsey work through her issues before she finds a way to heal. And while it does toe that line for a bit, it swerves just enough to completely avoid it. And it’s a testament to its central performances that makes Causeway so captivating to watch.